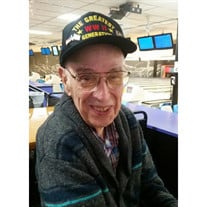 William Clifford Upham July 8, 1919 - October 5, 2016 Bill Upham passed away Oct. 5 following a stroke two weeks earlier. He was born in Portland, OR, the third of four children to Cecil Henry Upham and Julia Anne Johnson. He grew up in SE Portland and graduated from Commerce High School in 1937. Two days later he started working at Consolidated Freightways where he would be employed in various accounting positions for 46 years, interrupted only by WWII. From 1942-1945, he served in the U.S. Army 106th Infantry Regiment, 27th Infantry Division, Cannon Company in the South Pacific, Saipan, Okinawa, and Japan as part of the first occupation troops. Bill was blessed with the love and companionship of three wives, all of whom sadly lost battles with cancer. He was a compassionate caregiver throughout. He married Marie Maxine Smith in 1947. With help from family, they built a house and raised two daughters in SW Portland. In 1977, he wed Virginia Rounds and moved to Gladstone where he would live for the rest of his life, marrying Elaine Rinehart in 1991. He joined the Oregon City Elks, became involved with the Gladstone Historical Society, Gladstone Chatauqua Festival, and attended The First United Methodist Church of Oregon City. A man with a passion for bowling, he lived it, breathed it, dreamt about it. He served as President of both the Portland Bowling Association and the Oregon State Bowling Association. He was inducted into the Hall of Fame of each association for his tireless work on behalf of the sport. He is survived by daughters Diane Angelo of Portland and Janet Upham (Mike Bjork) of Gladstone; stepdaughter Debbie Groom (John Mein) of Oregon City; stepdaughter Jan Holter (Duane) of Coeur d'Alene, ID; their children and grandchildren. A celebration of Bill's life will start at 2pm on Sunday, October 23, 2016, in the Oregon City Elks Lodge dining room, 610 McLoughlin Blvd, Oregon City, OR, 97045. In lieu of flowers, his family requests that contributions be made to Kaiser Permanente Hospice Care Program or Honor Flight in your state.

William Clifford Upham July 8, 1919 - October 5, 2016 Bill Upham passed away Oct. 5 following a stroke two weeks earlier. He was born in Portland, OR, the third of four children to Cecil Henry Upham and Julia Anne Johnson. He grew up in... View Obituary & Service Information

The family of William Clifford Upham created this Life Tributes page to make it easy to share your memories.

Send flowers to the Upham family.