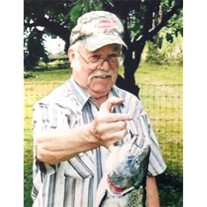 William "Bill" Cecil Simmons Sr. died of complications related to small cell carcinoma surrounded by family at his home on May 26, 2019 at 11:30 PM at the age of 73. Bill was born to Cecil Jonah and Christine "Tena" Roberta Simmons on February 5, 1946 in Twin Falls, Idaho. Bill was a Staff Sergeant in the Air Force during the Vietnam era serving in communications. Bill had a relationship-driven career in sales in the trucking industry. He was sought after for his expertise related to truck parts up until the last days of his life. Bill retired from sales in the trucking industry in 2012 and moved from Athena, Oregon to a small ranch in Colton, Oregon. He raised cows with his sons on the ranch. Bill, with his wife Linda, were avid yard sale experts and never met a sale that didn't agree with them. Bill was also a great fisherman, hunter, maker of walking sticks, woodworker and knife maker. Bill raised four sons; Bill Jr., Brian, Troy and Travis and welcomed eight more children; Carol, Craig, Hans, Jimi, Jorge, Kristen, Sue, and Yvette later in life through marriage and his spirit of adopting people who meant the world to him as his children. He loved his family more than anything and enjoyed time in the wilderness with family and friends. Bill was a loyal and likeable man with several close friends from his childhood, none like his close lifelong friends Dell and Patti King. Bill and Dell grew up together in Estacada, Oregon and Dell was at his side during his last days. Bill is preceded in death by his father, Cecil, his mother Tena, his first wife Clydell, his daughter Sue and his grandson Casey. He is survived by his second wife Linda, his twelve children; Carol, Bill Jr., Brian, Troy, Travis, Craig, Jorge, Jimi, Hans, Kristen, Yvette, his siblings Richard, Dianne, Carol, Harold "Geeg", Mary "Bert", Robert "Bob" and Asa "Rocky", 7 daughters-in-law, 2 sons-in-law, 43 grandchildren (including spouses), 26 great grandchildren, and several nieces and nephews. A service for Bill will be held at Clackamas Valley Baptist Church in Estacada, Oregon on July 1, 2019 as well as two private services for his immediate family at Willamette National Cemetery and in the wilderness. The family has asked that in lieu of flowers and money people honor Bill by planting a tree in his name at https://www.alivingtribute.org/. Bill was an admirer of the outdoors, which he enjoyed his entire life.

William "Bill" Cecil Simmons Sr. died of complications related to small cell carcinoma surrounded by family at his home on May 26, 2019 at 11:30 PM at the age of 73. Bill was born to Cecil Jonah and Christine "Tena" Roberta Simmons on February... View Obituary & Service Information

The family of William Cecil Simmons created this Life Tributes page to make it easy to share your memories.

Send flowers to the Simmons family.