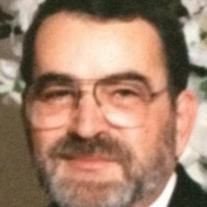 Warren was born in Longview, Washington, but grew up in the Mist-Birkenfeld/Vernonia area of northwest Oregon. That setting sparked his interest in hunting and fishing in his early years. A massive set of elk horns hangs in the garage as evidence of his passion and skill. He graduated in 1965 from Vernonia high school, and joined the U.S. Marine Corps the following year. This was the era of the Vietnam war, and his unit was assigned there in January 1967. Six months later he was severely wounded by enemy fire: acute foot injury, shrapnel in his arm and back, some loss of hearing in the right ear. He was awarded the Purple Heart medal. While he was recovering in the military hospital in Everett, Washington, he met his first wife, Frankie Lea Broers. They were married two years later, after his military service had ended. He built them a new 3 bedroom home on a five acre lot in Clackamas county. Their only child was a daughter, Stacie Marie. Even though Warren and Frankie were divorced in 1985, he remained very close to Stacie for the rest of his life. Warren met his second wife, JoAnn Carol Zoet, through worshiping at the same church and they were married in 1989. JoAnn had a daughter, Serena Dawn Taylor, from a previous marriage. He and JoAnn enjoyed traveling and fishing together. Their mutual capacity to laugh at life and themselves was a splendid bond, as was their spiritual and worship commitment. Warren had multiple careers. Following his military service he worked for the U.S. Forest Service for 29 years. He began fighting forest fires, became a fire crew boss, then led crews replanting trees in reforestation projects. He finally became a Timber Sale Officer, managing timber sales in the Mt. Hood National Forest District. During much of his Forest Service commitment he also operated a successful Christmas tree business on several locations, including portions of his five acre home site.In late 1998 and early 1999, tragedy struck. He was diagnosed with cancer, which was successfully treated. But in reaction to that surgery issue, he had a stroke which left him paralyzed on his left side, unable to walk, some degree of speech impediment, and requiring 24 hour care for the next 13 years. While outwardly severely handicapped, inside he was still Warren, keen to share time and reflections with family and friends. He suddenly experienced bleeding on the brain on May 31 and died on June 5. Warren was a good son, brother, husband, father, grandfather, and friend. He was loving, gentle, and caring. He had strongly held views about people and issues, but his sense of humor and faith made him a delight to know and cherish as a family member or friend.Warren is survived by his wife of 23 years JoAnn, daughters Stacie (son-in-law Randy) and Serena, granddaughter Alyssa Brooke, mother Irene, and brother Ron. In lieu of flowers a donation may be made to the American Heart Association, Evergreen Community Church, or a charity of your choice.

Warren was born in Longview, Washington, but grew up in the Mist-Birkenfeld/Vernonia area of northwest Oregon. That setting sparked his interest in hunting and fishing in his early years. A massive set of elk horns hangs in the garage as evidence... View Obituary & Service Information

The family of Warren Dale Kyser created this Life Tributes page to make it easy to share your memories.

Warren was born in Longview, Washington, but grew up in the Mist-Birkenfeld/Vernonia...

Send flowers to the Kyser family.