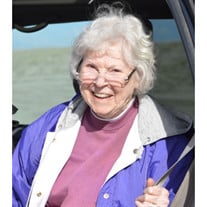 Toni Bernert Toni Ardeth Bernert passed away on April 2nd, 2018 from complications related to Lymphoma. She was born to Dorothy Ackman and William Cunningham on September 20th, 1926. Toni grew up with her mother and stepfather in the Army traveling across the United States. She graduated from Bellingham High School and then attended Marylhurst College. During college she met the love of her life, James William Bernert.  They were married in 1947 and had 35 years together until his death in 1982. Toni worked as a school teacher and then a homemaker while she raised her children.  A dedicated mother, she assisted her entire family in numerous ways including caring for grandchildren, working at the farm, and helping wherever needed. Toni enjoyed traveling with her husband, sister, children and friends. She was very active in her church and many charities. She lived in West Linn for over 70 years and was loved by many. She is preceded in death by her parents, her husband Jim, sister Mavis, her daughter Christina Ann and son Christopher John. She is survived by remaining children: Kathyrn Bernert, Elizabeth (Charles) Berkholtz, Timothy (Leslie) Bernert, David Bernert and Joseph (Mary) Bernert; daughter-in-law Cindy Bernert Coppola. She has 23 grandchildren and 23 great grandchildren. She will be missed by all her family and friends. A traditional Latin requiem mass will be held at 10:00 a.m., Saturday, April 14th, 2018 at St. Birgitta Catholic Church in Portland. The Rosary will be held Friday, April 13, at 7:00 pm at Holman-Hankins-Bowker & Waud Funeral Home, 715 7th St., Oregon City, OR 97045. Interment will be at 2:00 p.m., at St. John's Cemetery in Oregon City. In lieu of flowers, donations may be made to Our Lady of Clear Creek Abbey, 5804 W Monastery Road, Hulbert, OK 74441.

Toni Bernert Toni Ardeth Bernert passed away on April 2nd, 2018 from complications related to Lymphoma. She was born to Dorothy Ackman and William Cunningham on September 20th, 1926. Toni grew up with her mother and stepfather in the Army traveling... View Obituary & Service Information

The family of Toni Ardeth Bernert created this Life Tributes page to make it easy to share your memories.

Send flowers to the Bernert family.