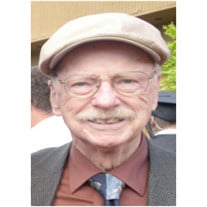 Taylor Colquitt Reece of Sherwood, Oregon passed away peacefully after a long illness on the evening of July 26th.  Taylor was born in 1927 in Spartanburg, South Carolina to Leonard and Elizabeth Reece.  He grew up in the rural South in the 1930's and 40's.  Taylor was drafted into the army paratroopers along with about half his graduating class to train for the invasion of Japan.  After completing college he went to Japan as a missionary, soon to be followed by his fiancé Lorraine Noe, his co-worker and best friend for the rest of his life.  They were missionaries in Japan with TEAM (The Evangelical Alliance Mission) for 47 years and then came back to the states and settled in Lake Oswego, Oregon close to family for 14 years until he and his wife moved to the assisted living at Avamere in Sherwood, Oregon. Taylor is survived by his wife Lorraine Reece of Sherwood, Oregon, by his brother Leonard (and Betty) Reece of Greenville, South Carolina, by his son Tim Reece (and Julie) of Lake Oswego, Oregon, by his son Steve Reece (and Rhonda) of Northfield, Minnesota, by his daughter Debbie May (and Gerald) of Tokyo, Japan, by his daughter Becky Goold (and Philip) of Tigard, Oregon, by twelve grandchildren and five great grandchildren. Taylor will be interred at the Willamette National Cemetery in Portland, Oregon and later, at the missionary cemetery in Karuizawa, Japan.  A memorial service is planned for August 19th at 11:00 at Mountain Park Church in Lake Oswego, Oregon (40 McNary Parkway, Lake Oswego, Oregon 97035). In lieu of flowers, donations can be made to Lorraine Reece at Avamere 16500 SW Century Dr.  Apt. 214  Sherwood, OR  97140.  The donations will be contributed to the memorial service in Japan and the ongoing work of TEAM in Japan.

Taylor Colquitt Reece of Sherwood, Oregon passed away peacefully after a long illness on the evening of July 26th.  Taylor was born in 1927 in Spartanburg, South Carolina to Leonard and Elizabeth Reece.  He grew up in the rural South in the... View Obituary & Service Information

The family of Taylor Colquitt Reece created this Life Tributes page to make it easy to share your memories.

Send flowers to the Reece family.