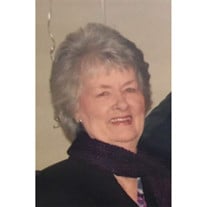 Shirley Renee Rogers, age 79 of Oregon City, passed away on August, 14, 2015. She was born in Yakima, WA on March, 28th, 1936 and raised in Kelso, WA. She graduated in the class of 1954, from Kelso High, where she was a well-liked Song Queen and Majorette. Over the years she enjoyed reuniting with her classmates and cherished many lifelong friendships from Kelso High. She married Stanford Rogers in 1956 and was blessed with 5 children. Shirley said her best times in life were spent at the little league field and watching all of their sporting events. She worked at Kelso Furness Drug until 1974 when they moved the family to Madras, Oregon. She worked at Aherns Grocery for over three decades and was well known for her great service and loved visiting with her customers. She has lived in Oregon City for the last 9 years, to be near her children and grandchildren. Soon after her move she met her boyfriend, Hugh Durrenberger. Hugh was a blessing for Shirley; he made her light up with excitement for each and every one of their weekly adventures to countless dinners, concerts, games, walks, and volunteering events; including meal on wheels, and the Special Olympics. She loved her family, she loved her friends, and you could always count on her laughing and having fun. Shirley always said that she was blessed she had such good friends her whole life, and they were very important to her. She held many memories of her bowling leagues, playing cards for hours, and vacations. Shirley is survived by her five children Larry Rogers (Lori), Mike Rogers (Cheryl), Sherie Rogers, Steve Rogers (Tabi), Shelly Spencer (Dave); grandchildren Rene'e, Ryan, Christy, Paul, Carson, Alena, Austin, Zoe, Brittany, Lakyn; great grandchildren Kyla, and Preston. We will all be missing her, and look forward to seeing her again someday in Heaven. Family Services were held in Oregon City.

The family of Shirley Renee Rogers created this Life Tributes page to make it easy to share your memories.

Send flowers to the Rogers family.