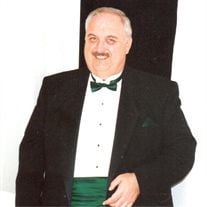 Robert Michael WeaverSeptember 24, 1942 - October 22, 2014Robert "Bob" Weaver, 72, lived a full and blessed life. He passed away peacefully on October 22, 2014, surrounded by his loving family.Bob was born on September 24, 1942 in White Plains, Michigan to Woodrow and Betty Weaver. He and his sister, Pam, grew up with fond memories of their years living by the lake. As a teenager, his favorite past time was water skiing. He learned to drive a boat long before it was even legal for him to drive a car. He loved telling stories about his younger years to his children and about his great memories of hunting, fishing, playing football and boating. He was proud of his Michigan heritage.After graduating from Milford High School, Bob attended Western Michigan University. At the age of 20, with all of his savings in his pocket, Bob drove his car across country all by himself to start a new life in California. He settled in Pasadena and worked in banking. It was not long after he arrived in town that he met the love of his life, his "rare pearl", Eileen Sullivan Weaver. In February of 2015, they would have celebrated 50 years of marriage.Bob and Eileen began married life in Downey, California. Their first born son, Michael, was welcomed into the world in 1967, followed quickly by their daughter, Lisa, in 1968 and their youngest son, Kevin, in 1971. Bob and Eileen loved their years in California and felt blessed to be able to raise their children surrounded by a wonderful and close-knit group of friends and family. Being an entrepreneur at heart, Bob left the bank to become a small business owner. He opened his first retail-flooring store in the early 1970s. He spent his evenings and weekends coaching little league baseball and participating in Indian Guides with his children. He loved taking the family camping at Big Bear and spending time at the beach. Bob loved building pinewood derby cars with his kids and he was always the anchor in every tug-of-war contest he participated in. His team always won.In December of 1978, Bob and Eileen moved their family to Redland, Oregon. Bob loved his little three-acre patch of heaven in the country because it reminded him of his youth in Michigan. He loved his riding lawn mower and his large vegetable garden. Bob opened two successful flooring stores in Portland and spent his evenings coaching baseball for his sons, watching his daughter play softball and attending every sporting event that his children were involved in. He loved sports and was a youth baseball umpire for many years. Bob loved cooking for his family and taught all three of his children to love it as well. He believed that a recipe was always a good starting place but nothing was quite perfect until he doctored it up a bit. He was an avid chess player and loved playing cards: solitaire, bridge, cribbage, poker, etc. You name it and he knew how to play it. An avid sports fan, he would religiously watch any and all sporting events on television and then replay the games on the phone with his sons. He loved hearing about his children's accomplishments and praised them whenever he could. Bob had a fantastic sense of humor and loved to tell stories. He taught each of his children the value of laughter and that the best way to get through life is not to take it so seriously. If he were reading this obituary, he would comment that there weren't enough old fogey jokes in it.Bob loved the holidays and spending time with his children, their spouses and his grandchildren. He welcomed his two daughters-in-law, Stacey and Kristy, and his son-in-law, Eric, into his family as if they were his own children. Of all of the roles in life that Bob embraced, the one he enjoyed the most was being a grandpa. He was a natural at it. He and Eileen were blessed with five beautiful grandchildren and he adored each and every one of them. Papa was so proud of Madison, Bailey, Hannah, Olivia and Drew and he loved hearing about their accomplishments, large and small, and bragged about them every chance he got.In his final years, he loved spending his days with his beautiful wife. He and Eileen were the best of friends and constant companions. He loved to make her laugh and would spoil her with jewelry and surprises whenever he could. More than anything else in the world, Bob loved his family. He defined his worth by his role as a husband, a father and a friend. He was a man of great character and integrity. He had the bravest heart and the sweetest soul. He was the very definition of generosity. He was humble and kind and he had a smile that could melt your heart. Bob had this incredible ability to make everyone around him feel special and unique. Anyone who knew him loved him. Bob's mother and father, Betty and Woodrow Weaver and his sister, Pamela Weaver Crisovan, have preceded him in death. He is survived by his loving wife, Eileen, his children and their spouses, Michael and Stacey Weaver, Lisa and Eric Bergeson, and Kevin and Kristy Weaver and his five grandchildren, Madison Weaver, Bailey Weaver, Hannah Bergeson, Olivia Bergeson and Andrew Bergeson.A funeral Mass will be held at St. John the Apostle Catholic Church in Oregon City on Tuesday, October 28th at 11:00am. A reception will follow at The Tumwater Room above the Museum of the Oregon Territory in Oregon City. Any donations in Bob's memory can be made to the American Heart Association.

The family of Robert Michael Weaver created this Life Tributes page to make it easy to share your memories.

Send flowers to the Weaver family.