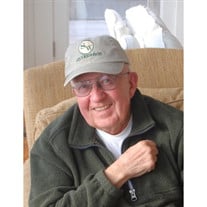 Robert "Bob" Charles Modlin peacefully passed away on February 24th, 2021 surrounded by his wife, Shari, and their children, Lori and Rick, at his home in Nampa, Idaho.  Bob was born on July 30th, 1937, in Wendell, Idaho to Delbert R. and Frances J. Modlin (née Rutter). He attended elementary school through his junior year in high school in Jerome, Idaho and graduated from Shoshone High School. He then went on to study at Idaho State College (now University) earning a B.S. in Business Administration in 1960. Upon graduation, he entered the United States Army where he completed his active duty training as a Field Artillery Officer, 2nd Lt., and then served 8 years in the Army Reserves, receiving Honorable Discharge as a Captain in 1968. Bob met his wife, Sharon "Shari" Brink, in 1958 through his sister, Carlene. They were both attending Idaho State at the time and dating other people. They soon started riding to school together and began to fall in love and the rest is history. Bob and Shari married on June 9th, 1962, in Jerome, Idaho. They lived in Twin Falls until 1963 when they moved to Boise. He worked for Industrial Indemnity for 6 years and then as an accountant for Idaho Power from 1969 until his retirement in 1993. Bob is survived by his wife, Shari; his daughter, Lori Rux and her husband, Scott, (Oregon City, OR); his son, Rick Modlin and his wife, Jilene, (Oregon City, OR); his sisters - Eleanor Medley and her husband, Ken, (Chubbuck, ID), and Carlene Knight and her husband, Jim, (Twin Falls, ID); his brother-in-law, Rod Brink (Salinas, CA), and his sister-in-law, Vicki Brink (Dallas, OR); his grandchildren: Nathan and Rachel Modlin; Naomi, Louisa, and Sam Rux; and several nieces and nephews. He is preceded in death by his parents and 2 nephews. Some of the ways Bob enjoyed spending his time were camping, woodworking, battling it out on the pool table, entertaining his grandchildren with his tall tales, and bowling on the Idaho Power Bowling team, "The Squelchers." We will all dearly miss him for his endless humor, his tendency to try to shove his grandchildren's thumbs into the butter, and his mysterious ability to remain twenty-nine years old over the span of five decades. Memorial for extended family and friends will be held later this spring or summer. Please check back for personal remembrances from his grandchildren.

Robert "Bob" Charles Modlin peacefully passed away on February 24th, 2021 surrounded by his wife, Shari, and their children, Lori and Rick, at his home in Nampa, Idaho.  Bob was born on July 30th, 1937, in Wendell, Idaho to Delbert R. and Frances... View Obituary & Service Information

The family of Robert "Bob" Modlin created this Life Tributes page to make it easy to share your memories.

Send flowers to the Modlin family.