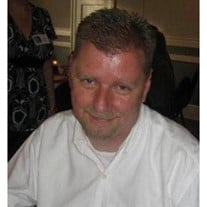 Patrick's family has postponed his memorial scheduled for March 17th to a later date still to be determined, due to an abundance of caution and recognition of current concerns about group gatherings related to the current virus crisis.      Patrick John Finney Aug. 13, 1959 - Feb. 27, 2020   Patrick John Finney was born Aug. 13, 1959 in California to John and Jane Finney. He and his younger sister Kathleen grew up in Jennings Lodge, near Gladstone and graduated from Oregon City High School. Following high school he served in the US Navy, later earning a political science degree. Following his naval service, Patrick married Dawn Weber and they had two children, Ryan and Shannon. They later moved to southern California where Patrick worked with tech companies in the field of technical sales and marketing. He and Dawn later divorced but remained close. Patrick met and married Donna Countryman and they shared several years together and remained friends after their divorce. Patrick continued with marketing eventually forming his own digital marketing and web services company, Bent Oak Marketing. More recently Patrick earned his real estate license and was applying his marketing expertise in a new field. He had made an incredible connection with Lisa Collette. He visited her in Waldport and they talked daily. He was diagnosed with cancer in December and put up a brave fight, but lost that battle on February 27th. He was so proud of his children, Ryan and Shannon, and his grandchildren, Kendra, Kenzie, Mya and Luke, who he dearly loved. One of his last great memories was accompanying granddaughter Kendra around the roller rink at her birthday party in January (skating was a favorite past time of his).   Patrick's friends knew him as someone who was never at a loss for words and enjoyed vigorous debate. He stayed connected to his Oregon City High alums, and to many friends and family in the area. Please leave us a message on this websites memorial register or www.oregonlive.com/obitsto.. Patrick is survived by his two children, son Ryan (Amanda) grandkids Mya and Luke, and daughter Shannon Kennedy (Sean) grandkids Kendra and Kenzie, his sister, Kathleen Finney (Matthew) niece Nebraska, his stepmom, Dr. Paula Eschtruth, former wives Dawn Finney and Donna Hunt (Countryman), and his partner Lisa Collette. He was preceded in death by his parents.   Memorial donations can be made to CASA For Children www.casahelpskids.org and to the American Cancer Society www.cancer.org/

Patrick's family has postponed his memorial scheduled for March 17th to a later date still to be determined, due to an abundance of caution and recognition of current concerns about group gatherings related to the current virus crisis.      Patrick... View Obituary & Service Information

The family of Patrick John Finney created this Life Tributes page to make it easy to share your memories.

Patrick&#39;s family has postponed his memorial scheduled for March...

Send flowers to the Finney family.