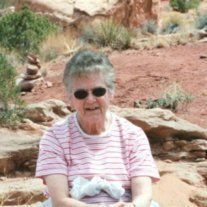 Myrle L. Lewis Dec. 25, 1925 -April 08, 2013 Myrle passed away on April 8,2013, she was 87. She was born on Dec. 25, 1925, in the Oregon City area to parents Wesley and Gertrude Brockart. She lived her whole life in the Oregon City/West Linn area. She married Neal R Lewis on Ian 14, 1945. She was mostly a homemaker and mother of four children. Myrle is survived by her four children, Marilyn Freimuth, Marlene Lewis, Wallace Lewis and Patty Kalafate; grandchildren, Earl Freimuth, Marlene Duval, Steven Davis, Michelle Hazard, Nicole Gornick, Holly Holloway, Gregory Abel, Amber Abel and Vanessa Fatheree; as well as 10 great-grandchildren; and two great-great- grand­children. She was preceded in death by her husband, Neal R Lewis; by her parents, Wesley Brockart and Gertrude Oliver; and stepfather, Victor Oliver. Viewing will be on April 12, 9-4, and April 13, 9-2, and before the funeral on April 15, 2013 at 1 p.m. at Holman­Hankins' funeral home in Oregon City.

The family of Myrle Lillie Lewis created this Life Tributes page to make it easy to share your memories.

Send flowers to the Lewis family.