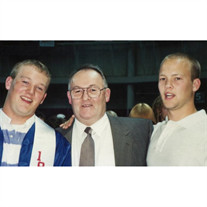 Montgomery Lee Smith passed away peacefully after a brief battle with cancer on Monday morning April 9, 2018.  While we're deeply saddened by his passing, we take comfort in knowing that he's in a much better place. Montgomery was born, August 18, 1935, to Raymond and Edith Smith in Portland, Oregon.  He shared a happy and carefree childhood with his siblings Patricia Walden and Donald Smith.  He attended the University of Washington and Portland State University earning a Master's degree in Speech Pathology and Audiology.  He worked for the Forest Grove School District and the Oregon Liquor Control Commission.  He enlisted in the US Navy and while serving active duty, he was ordered to serve with the Marines, Coast Guard and Air Force.  He also served in the Army Reserves to achieve his full 20 years of service and was called up for active duty again in 1991 during the first Gulf War. He married his first wife LeiLani Kenyon and had two daughters.  They divorced but remarried later in life.  He married his second wife Beverly Davis and had two sons.  He was predeceased by his father Raymond Smith, mother Edith Smith and his sister Patricia Walden.  He is survived by his wife, LeiLani Smith, daughters: Natalie Smith of Gladstone, Brenda McGee, son-in-law Sean McGee of Westport, Connecticut, sons: Desmond Smith, daughter-in-law Michelle Chandler-Smith of Renton, Washington, and Kevin Smith and Katie Collins of Clinton, Utah, and brother, Donald Smith and sister-in-law Alice Smith of Renton, Washington.  He will be missed by his grandchildren, Erin McGee, Mary McGee, Chandler Smith, Sean McGee and Hartley Smith. Private interment with full military honors will be held at Willamette National Cemetery on Friday, April 27th at 11:00am, followed by a 12:30pm Memorial Service at Apostolic Faith Church, 5601 SE Duke Street, Portland, Oregon.

Montgomery Lee Smith passed away peacefully after a brief battle with cancer on Monday morning April 9, 2018.  While we're deeply saddened by his passing, we take comfort in knowing that he's in a much better place. Montgomery was born, August... View Obituary & Service Information

The family of Montgomery Lee Smith created this Life Tributes page to make it easy to share your memories.

Montgomery Lee Smith passed away peacefully after a brief battle...

Send flowers to the Smith family.