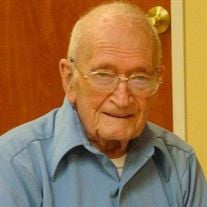 Merlin Doyle BrennemanJanuary 15, 1927 - November 28, 2014Merlin Doyle "Mick" Brenneman was born to Roy and Mellie Brenneman on January 15, 1927 in Henry, Nebraska. He passed away November 28, 2014 in Lake Oswego, Oregon of complications from Parkinson's disease. Mick's family moved to a farm near Johnstown, Colorado when he was eight years old. They worked the farm for several years before moving to Silverton, Oregon where he, his father and his uncle Charlie would work at the Swan Island shipyards. They commuted daily from Silverton to Portland in an old model T truck. Mick attended the 11th and 12th grade in Silverton. He graduated high school in 1944 and joined the Army Air Corps in 1945. He served as a military policeman in Reykjavik, Iceland and was honorably discharged in 1947. Mick married Betty Jean Butler in Greeley, Colorado on Dec. 22, 1946. They moved to Silverton, Oregon where they worked, lived and started a family. In 1955 Mick took the family back to Colorado where he worked for the Pepsi Cola bottling company. In 1962 Mick and family returned to Oregon, settling in the Oregon City area. He worked as a refrigeration mechanic for Safeway for several years before retiring. Mick was a life long member of the Oregon City Elks and was happiest when he was fishing with family and friends. He enjoyed the empty spaces of eastern Oregon and he and Betty took many road trips. Mick is survived by his brother Lyle (Dianne) Brenneman of Washington D.C., son Danny (Beverly) Brenneman of Clackamas, Oregon, daughter Patricia (Buzz) Williams of Scappoose, OR, daughter Kristen (Gary) Lyons of Lake Oswego, OR. His grandchildren include Matthew Brenneman, Jesse (Erika) Brenneman, Jamie Brenneman Davie (Dustin), Robert (Margi) Williams, Carrie Williams Harris (Joe), Cody, Austin and Kelli Lyons. His great grandchildren are Kyle and Garrett Harris, Emma and Mason Williams, Danny and Sydney Davie, and Coleman Brenneman. He was preceded in death by his brother, Gordon, sister Wilma, wife Betty and son Michael. There will be a celebration of life service and reception at Sunnyside Little Chapel of the Chimes at 11:00 AM on Friday, December 19th. In lieu of flowers contributions may made to the Michael J. Fox Foundation for Parkinson's Research PO Box 4777 NY, NY 10163-4777

The family of Merlin Doyle Brenneman created this Life Tributes page to make it easy to share your memories.

Send flowers to the Brenneman family.