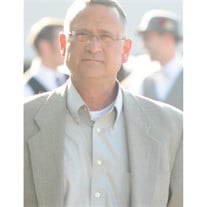 It is with great sadness that we announce the passing of Mathew John Decker, who left us too soon on June 27, 2021.  Matt was a proud father, grandfather, son, brother, uncle, in-law and friend who touched so many lives before his sudden and unexpected passing due to complications from a stroke he suffered on June 13, 2021. Matt was born in Port Hueneme, California to Raymond M. and Bernadette A. Decker in 1966.  Shortly after, Matt spent a short time with his parents in Bremerton before Ray and Bernadette settled in Spokane, WA, where he resided through high school.  Matt was the proud older brother of James (Jed) E. and Thomas M. Decker, and took this role seriously throughout his life, despite occasional protestations from both Jed and Tommy. Matt was a 1984 graduate of Ferris High School, and prior to enrolling at Carroll College in Helena Montana he spent a year living in Belgium with his host family the Franzen's.  This sparked his love of languages and travel and led him to enroll in the US Army in 1989 after graduating from Carroll with a degree in French and International Relations. While at a friend's wedding, Matt met Mary Ann Unfred, and they married on July 14, 1990 in Pacific Grove, California.  The Army brought many adventures for them with stops at the Defense Language Institute in California, Darmstadt, Germany and Mons, Belgium.  Matt and Mary Ann celebrated the birth of their first child, John Raymond in Darmstadt in 1992, and gave birth to Kristyn Ann in 1994 while stationed in Mons.  In 1996, Matt and Mary Ann moved back to the Portland area where they welcomed their third child, Brigitte Elizabeth in 1997.  The Decker's settled in Oregon City where they raised their family.  From the time Matt left the Army in 1996 until his passing, he applied his love of languages as a localization manager for various technology firms throughout the Seattle and Portland areas. In addition to the family mentioned above, Matt is survived by his mother-in-law Helen Unfred of Milwaukie, OR, his daughter-in-law Kayla Chelini-Decker (John) of Butte, MT, his son-in-law John Ascroft (Kristyn) of Oregon City, OR and Kiefer Goldberg (Brigitte) of Portland, OR.  He was also loved by many brothers and sisters-in-law including Sue and Bill Hays of Oregon City, OR, Patty Unfred of Portland, OR, Tom Davis and Daynen Lalicker of Butte, MT, John Unfred of Lakewood, WA, Laurie Decker of Bellingham, WA, and Rob McDonough of Federal Way, WA. One of Matt's most memorable moments came when he became a grandfather to Ashlynn Decker in December 2015.  Matt was so proud to be a grandfather and cherished his granddaughter, Ashlynn Decker who affectionately referred to him as Opa.  He was the loving uncle of Sean and Megan Hays, Sophie and Maya Montgomery, Shea and Sudha Davis Elizabeth and Katherine Lalicker, and John, Luke, Jacob, and Lawson Unfred.  He also leaves behind his aunt, Rosellen Frisbee of Lincoln MT, his uncle Peter Beuttler of Seattle, WA, and many cousins and countless friends. Matt loved photography, barbecuing, spending time with his family, road trips to Montana to see relatives, Mariners games, national parks, and enjoying a pint or two of beer over stories and laughter. Unfortunately, his passing left an unfinished list of many adventures and memories with family and friends. Matt's love, sense of humor, dedication to family, and his unending joy of spending time with those he loved will be greatly missed by all whose lives he touched.  Matt's life, spirit, legacy and contributions provided a unique contribution to this world and has benefited many lives.  His loss leaves a big void in all our lives and we will miss him greatly. In lieu of flowers, donations in his name can be made to the Humane Society of Portland, The Fisher House Foundation, or your favorite national park. Graveside services for family and friends will be held Thursday July 8th at 2 PM at the Willamette National Cemetery in Portland, OR, with a remembrance of life held immediately after at the Madison Taproom in Oregon City.

It is with great sadness that we announce the passing of Mathew John Decker, who left us too soon on June 27, 2021.  Matt was a proud father, grandfather, son, brother, uncle, in-law and friend who touched so many lives before his sudden and... View Obituary & Service Information

The family of Mathew Decker created this Life Tributes page to make it easy to share your memories.

It is with great sadness that we announce the passing of Mathew...

Send flowers to the Decker family.