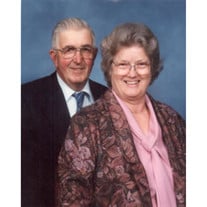 Mary Jo Staehely Born: October 8, 1928 Died: January 3,2018 During the early morning moments of January 3rd, Mary Jo Staehely broke free from her earthly ties and began the next stage of her journey with Jesus, her Lord and savior as her guide. Her last hours were spent with her family at her bedside to give her the proper sendoff. Mary Jo was born October 8, 1928 to Ida Hawk Fisher and Robert S. Fisher in Oregon City. She was the oldest of four children. Her sister, Phyllis (Salzer) who resides in Mapleton and two brothers Richard and Ronald, both whom preceded her in death. Later the Fisher family moved to a rural area of Stafford where Mary Jo grew up attending grade school and graduated from West Linn High School in 1947. Mary Jo attended Oregon State College for one year after which she was employed by Oregon City Abstract. In 1949 she represented Oregon City as a princess on the Oregon City float during the Rose Festival Parade. She then married the "love of her life," Art Staehely of Oregon City. She and Art spent the next 59 years raising five children on the family dairy farm located in the New Era-Central Point area just South of Oregon City. Their marriage was strong and filled with love which set an exemplary standard. Art preceded her in death in 2009. They had five children which include Marilyn (John Millison), Paul (Diane Russell), Jim (Donna Miller), Carol (Kevin Dinsmore) and Janice. In addition, Mary Jo also served as Grandmother to 10 grandchildren and 10 great-grandchildren. Being matriarch to a large family was appropriate because she always referred to "people as being her primary hobby." Mary Jo was an active member of the First Baptist Church of Oregon City. In addition, she kept very busy supporting the activities of the Clackamas County and Oregon State Dairy Wives, OSU Extension Club, West Linn reunion committee as well as a long-time advocate for projects supporting individuals with special needs. Mary Jo was always recognizable as the person with the quickest smile and genuine and sincere welcome. She will be missed by many whom she touched over the course of her 89 years. A memorial service will be held on Friday, January 12th at 11 AM at the First Baptist Church of Oregon City located at the corner of 9th and John Adams streets in Oregon City. Donations in the name of Mary Jo Staehely can be made to the First Baptist Church of Oregon City memorial fund.

Mary Jo Staehely Born: October 8, 1928 Died: January 3,2018 During the early morning moments of January 3rd, Mary Jo Staehely broke free from her earthly ties and began the next stage of her journey with Jesus, her Lord and savior as her... View Obituary & Service Information

The family of Mary Jo Staehely created this Life Tributes page to make it easy to share your memories.

Send flowers to the Staehely family.