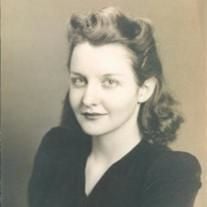 When Jeanne passed into God's presence, she left behind her son Robert, his wife Jane, four grandchildren; Heather, Robert Sean, Michael, Nicholas and six great-grandchildren; Mikayla, Anna, Nick James, Connor, Ryan and Samantha.Her life spanned nearly 9 decades, the last 8 decades of the 20th century and the 1st decade of the 21st century. The early years were spent at various locations in the mid-west. Her father, a bricklayer by trade and later architect's construction superintendent, and his family went where there was work. The family enjoyed prosperous years before the depression of the 1930's. When the depression hit, the family went to live with her mother's "aunty grandma", Mrs. Goodwill, on a resort she owned in northern Minnesota on Lake Vermillion, near the town of Cook.In her early years Mary Jeanne was "Murry Jeen" to her two year older brother Bobby. During those years she was shy and Bobby spoke for her on many occasions. "Murry Jeen" wants this or "Murry Jeen" says that. She was well protected and watched over by her "big" brother. While not rich in worldly goods, the DeWeese family was rich in those things which mattered. Hard work was required of all, and everyone gladly pitched in. Fun was to be had as well, as the many pictures below attest to. Loving parents provided the protection of a close knit family. Mary Jeanne and Bobby were best friends. Her adolescent and teenage years were spent this way.Mary Jeanne and Bobby were good students. Mary Jeanne was such a good student that she was advanced by two grades while in grade school. She graduated high school at 16 years of age, class Valedictorian! College was next for both her and Bobby. That was completed in the normal time.But by that time, the winds of WWII had broken out and they both answered the call to duty and volunteered. Mary Jeanne was assigned to a P-38 fighter pilot training unit were she helped in an administrative capacity. At the end of the war as the last missions were being flown tragedy struck and a good friend of the family was killed and then Mary Jeanne's love and probably future husband was also killed. Much sadness. But also much to be thankful for. The family was back together safe and sound, much to the immense relief of loving parents.Happy days were here again and now the rest of her life was in front of her. Marriage followed a few years later. A son was born. And unfortunately, a few years later, divorce. Mary Jeanne moved back in with her parents with her infant son. She was to live with them for almost all of the remainder of their lives. After the divorce, a short sourjorn back to school to obtain a teaching certificate and then Dad, Mother, Mary Jeanne and son Robbie (Robert) moved to LaGrange, Il (Chicago). There, Mary Jeanne taught 4th and 6th grade school for 30 years. Summers were spent at Lake Vermilion and the rest of the year in LaGrange. While continuing to teach full time, she went back to school and earned a masters degree in child development. She retired and moved out to the Portland, Oregon area to be near her son and his family in 1980.Jeanne took her grandchildren on many day trips hiking on Mt. Hood's lower slopes. A time they fondly remembered being with Gra'ma. Day trips to the beach, birthday parties, sport events, Christmas and holidays of all sorts were always time to be together as a family. As the grandchildren grew older and the day trips became more and more physically difficult, Jeanne volunteered at the Children's Resource Board (CRB). That was a panel which reviewed various court cases regarding children's custody issues and made recommendations to the court regarding them. Jeanne continued her volunteer activities there up until about the last year of her life when failing eyesight prohibited her continuing.Over the years, many who knew Jeanne would come up to me (her son) and say what a wonderful mother you have. To which I can only reply, yes I do. Mom, Gra'ma, Grandma Jeanne (to her great-grandchildren), Aunt Mary Jeanne, "Murry Jeen" and Mary Jeanne (devoted daughter) you are held in loving memory.For more, please visit http://amzgrace.com/in-loving-memory.html.

The family of Mary Jeanne Grace created this Life Tributes page to make it easy to share your memories.

When Jeanne passed into God&#39;s presence, she left behind her son...

Send flowers to the Grace family.