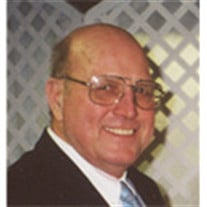 Martin "Dwight" Savage was born to Cyrus Dow and Leverna Lee (Bishop) Savage in Bedford, Iowa in his family home on April 24, 1928.  He passed away August 7, 2019 at the age of 91 years from complications of pneumonia at the Meridian Park Hospital in Tualatin, OR.  Dwight battled with Alzheimer's for several years and was a resident of The Springs-Wilsonville, Hampton Lane Memory Care in Wilsonville, OR from September, 2018 to August, 2019. He attended West Linn High School but quit as a sophomore to care for his mom.  At the age of 16 he built a small house in the Rosemont area of West Linn.  He was a long-time member of the Oregon City Church of the Nazarene where he married Dorothea Jean Cain on June 8, 1948.  They lived in Oregon City and then moved to the West Linn farm in 1952. After working in the sprinkler business for several years at Western Golf Course Supply and Willamette Irrigation, Dwight decided to start his own business in 1962 - Savage Sprinkler Service - with his wife, Dorothea, working in the office. He served as an example to all that honesty in business is the foundation of success. We will always remember his laugh and smile.  He was always a joker, story teller and the life of a party.  His true passions were flying, motorcycles, four wheeling, going on wild rides at fairs, working on projects in his shop, attending sports events, traveling and most of all, he enjoyed his family. They attended the Clackamas County Fairs and the Oregon State Fairs for 66 years.  From 1968 through 2015, Dwight and Dorothea loved to attend the State High School Basketball Tournaments.  They also supported neighborhood kids in their 4-H and FFA clubs at the livestock auction held at Clackamas County Fairgrounds.  They sponsored a girl's softball team and men's basketball team under the team name of Savage Sprinklers. Dwight was preceded in death by his parents and siblings: Cleo Arlene Savage Hoskins, Marguerite L. Savage Ahrens, Amos Wayne Savage, Nellie Gail Savage Mason and Donald Darrell Savage. He is survived by his wife of 71 years, Dorothea Jean (Cain) Savage; daughter, Cheryl Larson (Don) of West Linn; grandchildren, Lisa Huynh (Minh) of Happy Valley and Kevin Larson (Brenda) of Yorktown, Virginia; many nieces and nephews, and other extended family members because if Dwight met you and liked you, you became family! Rev. David Shankle will officiate a Celebration of Life service at the Oregon City Church of the Nazarene, 716 Taylor Street, Oregon City on Saturday, September 7, 2019 at 11:00 a.m.  Memorial contributions may be made to the Alzheimer's Association (Oregon Chapter), 1650 NW Naito Parkway, Suite 190, Portland, OR 97209.

Martin "Dwight" Savage was born to Cyrus Dow and Leverna Lee (Bishop) Savage in Bedford, Iowa in his family home on April 24, 1928.  He passed away August 7, 2019 at the age of 91 years from complications of pneumonia at the Meridian Park Hospital... View Obituary & Service Information

The family of Martin "Dwight" Savage created this Life Tributes page to make it easy to share your memories.

Send flowers to the Savage family.