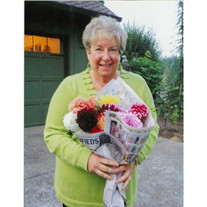 Margaret Jean (Ritter) Christenson, "Peggy" April 20, 1943 - July 19, 2021. Peggy Christenson passed away on July 19, 2021, at her residence in West Linn, Oregon. She was 78 and fought a battle with heart disease and diabetes. She led a life made rich by her friendships and family. Peggy was born in Portland, Oregon and was the daughter of Frederick and Margaret Ellen Ritter. Peggy graduated Lincoln High School in 1961 and attended Marylhurst College where she studied one of her passions, art. In 1968 she married Eric R. Christenson, Jr. who was a childhood friend. Shortly after their son, Eric F. Christenson, was born, Peggy and Eric settled in Sherwood, Oregon. Peggy was a supportive mother, engaged in Sherwood School events who also enjoyed cooking and hosting gatherings. In 1985, Peggy and Eric started a retail gift store. The Gray Whale Gallery and Gifts was one of the many well-known Long Beach attractions on the Long Beach Peninsula. Peggy would enjoy the friendships for years to come from customers and staff that worked or visited the Gray Whale. The business remained opened from 1985 to 1998. Peggy and Eric were married for 28 years before he unexpectedly passed away in 1996. Peggy relished travel with friends to destinations such as Hawaii, Italy, and France. See was actively involved in needlepoint groups and quilting groups in Washington and Oregon.  She enjoyed taking her friends to the Multnomah Athletic Club where she was a member. She was exceptionally generous to her friends and family and had a passion for finding the right gift to mark a milestone event, birthday celebration, holiday, anniversary or just because. She cherished her friendships and worked hard to bridge the distance with out-of-town friends and maintained close connections with people she knew from Lincoln High School. She was a loyal mother, dedicated grandmother, and a good friend to many. She treated many friends as family and benefited by like treatment. She was passionate about making quilts, needlepointing, painting, hosting parties, taking cooking classes, listening to music, and writing poetry. She frequently donated her own paintings and quilts to charities and helped with making hundreds of face masks for anyone who needed one. Peggy will be missed by many. Peggy is survived by her son Eric F. Christenson, daughter-in-law Nancy and grandchildren Eric J. and Hannah. Sister; Janet Simpson and husband Nick Simpson, her nephew Justin and Kathy Simpson and daughter Rylee Simpson. A celebration of life will be held at Skyline Memorial Gardens Funeral Home, 4101 NW Skyline Blvd, Portland, Oregon on Saturday August 7th, 2021at 1 PM. Reception to follow at location to be announced. RSVP not required, but respectfully requested email: [email protected] Peggy's favorite charities include: Portland Audubon Society, Japanese Garden Foundation and the Dove Lewis Emergency Animal Hospital.

The family of Margaret "Peggy" Christenson created this Life Tributes page to make it easy to share your memories.

Send flowers to the Christenson family.