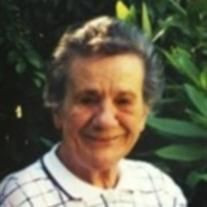 Lou Anger passed away at age 85 on January 5, 2013 in Milwaukie, Oregon, following complications from a fall and hip surgery. She was born Lucille Gertrude Allard on May 5, 1927 to Oza and Eva (Brodeur) Allard in Woonsocket, Rhode Island, the fourth of nine children. Lou, or M'mere as many knew her, spent her entire life caring for others. As a young single mother, she worked tirelessly to provide a good life for her six children. Her smile and energetic presence was a fixture, first at the NCO Club at McClellan AFB, and then at Marie Calendars restaurant on Arden Way, in Sacramento, Calif. In 1981 she relocated to West Linn, Oregon to be with her grandchildren. More grandchildren followed and, as her family grew, she enjoyed her visits to help care for the new little ones that came along. Those who were lucky enough to know Lou were blessed with her selfless nature, caring touch and wicked sense of humor. In her early years, Lou had a passion for horses and loved to ride. Being a life long Yankees fan often put her at odds with her Red Sox loving father, but she never lost her love of the game. Lou was an accomplished gardener, seamstress and impressive cook, always able to feed a large family at a moment's notice! Lou is survived by daughter Jacqueline Hubka (Alan), son Jim Anger (Kimberly), daughter Judith Sewald (Wayne) and sons John Anger (Becky) and Joseph Anger; grandchildren Ryan Hubka (Ryan-Marie), Adam Hubka (Stephanie), Christian Anger (Gina). Nathaniel Anger (Sunshine), Lisa Robbins (Mike), Leah Sewald, Gina Vallery (Cory), Alayshay Anger, Erick Ellis, Roman Anger and Janie Jackson (Jaimie)and 11 Great Grandchildren. She is also survived by sisters, Jacqueline Grenon(Arthur) of Cumberland, RI and Bertha Hamel (Norman) of Rehoboth, MA.,numerous nieces and nephews. Lou was preceded in death by her daughter Jane Birchard, her parents and 6 brothers and sisters. At Lou's request, there will be no funeral. A private disposition of ashes will be planned. "A life of giving...is a life well lived."

Lou Anger passed away at age 85 on January 5, 2013 in Milwaukie, Oregon, following complications from a fall and hip surgery. She was born Lucille Gertrude Allard on May 5, 1927 to Oza and Eva (Brodeur) Allard in Woonsocket, Rhode Island, the... View Obituary & Service Information

The family of Lucille Gertrude Anger created this Life Tributes page to make it easy to share your memories.

Send flowers to the Anger family.