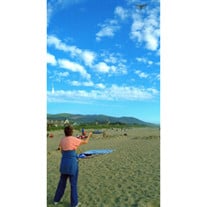 Born in Nebraska City to Lila Maude (Croft) and Joseph Francis McNichols, owners and operators of McNichols Bakery.  The family moved to Washington, in 1940 where Lila attended Millwood Grade School and graduated from Vancouver High School in 1954.  Lila met her 1st husband where she worked, at the Stock Yards in Portland (now the Expo Center), and married Albert (Swede) Elvino Carlsen, March 3, 1955.  Daughter Teresa Jane Carlsen was born on August 29, 1956 in Oregon City.  The family moved to the Philip Foster House, 1956 to 1970, renting from Roy E. L. and Evelyn (Foster) Meyers.  Lila put her excellent secretarial, writing & editing skills to work, typing and editing several manuscripts for Mr. Meyers, one entitled, They Called it Jack-Knife:  A History of Eagle Creek Community and School District #17.  The family treasured the history shared by Mr. Meyers and the many items of historical value in the home which will be donated back to the Philip Foster House that is now a museum. Lila loved to garden & was an Organic Gardening magazine subscriber well before it became mainstream.  She made sure she preserved the original plants on the Foster property, bringing many seeds and starts to their new home built down the road in 1970.  Lila & Albert loved animals & took advantage of the Farm to raise chickens, pigs, sheep, barn cats that appeared, and dogs Ring & Sydney.  Albert raised thoroughbred race horses & Teresa's pony Topper.  Lila was baptized near Barton Park in the Clackamas River & taught Sunday school for 3, 4, 5 year-olds at Barton Baptist Church, 1963 to 1972.  In the 1960's she was a secretary at State of Oregon's Board of Health Dept.  She led 4-H cooking and knitting classes at Eagle Creek Grade School where daughter Teresa attended 1962 to 1967.  In the early 1970's, Lila was a secretary at Estacada Middle School, leading efforts to vote in the Oregon School Employees Association (OSEA) Classified Office Workers Union.  On their 23rd wedding anniversary, March 3, 1979, she lost her beloved husband Albert to cancer.  She was office manager at RSG Lumber Mill in Estacada in the 1980's.  She joined Toastmistress Council 4 in the mid 1980's, served as president, and enjoyed traveling to competitions in Ashland, Alberta Canada, Boston( where she rode a moped to see the city), and Denver where she met a distant cousin, William Henry McNichols, Jr. Mayor of Denver 1968-1983.  She learned about William's brother, Stephen Lucid Robert McNichols, who was Governor of Colorado but passed on November 25, 1977.  On May 20, 1988 Lila married Robert Louis McKay, long time Eagle Creek resident & US Post Master there.  Robert had 2 sons, Scott Alan & Kelly Blake McKay.  Teresa & Scott were a grade apart and had attended school together.  Lila & Robert enjoyed many years of travel, gardening, canning, and companionship until his death March 4, 2001.  They were actively involved in their community and delivered Meals on Wheels.  In January 2002, Lila became an Eagle Creek Grange member, holding the offices of treasurer and chaplain, volunteering at Grange events and fundraisers.  She especially enjoyed these annual Grange events open to the community:  Easter egg hunt; Rummage sale; Sweet heart dinner; and any pot lucks.  The Grange members will greatly miss her apple pies.  A potluck & draping service to honor Lila at the Grange will be held on Saturday, January 19, 2018 at 6:30 p.m.  Lila also enjoyed attending activities at the Estacada Senior Center.  Always a bargain hunter, she greatly lamented the closing of Mike's 2nd Hand Store in Estacada.  Beloved brothers & spouses:  Hugh & Beverlie, Bernard & Joyce, John & Jane, Robert & Linda, Alan & Arline, Michael & Mary McNichols.  Daughter Teresa Carlsen and grandson David Albert & Kirian Mirth Wachsmuth.  Step sons Scott Alan & Kelly Blake McKay.  Lila loved her cat Thomas, and the two of them were inseparable.  Beloved friends:  Kenneth & Jeanette Bertha; Dorothy & Jack Haynie; Carol Waugh; Lee Jones; Ann Haines; Bert Martinez.  Lila's paternal grandparents, Mary (Wynn) and John P. McNichols left Sligo, Ireland in the late 1800's for the US due to famines & settled in the mid-west.  Her maternal grandparents, Margaret (Potticary) & George Croft lived in Water Town, South Dakota & her mother, Lila Maude McNichols was born there. George Croft was from Ireland & Margaret was from Great Grimsby, England.  Margaret claims to be related to Sir Francis Drake.  An uncle, Bruce Croft, lived in California.  Many thanks for the love and care given by Jan Melcher, and Leo & Linda at Golden Years and to the friends she made there.  Mt. Hood Hospice provided precious comfort and eased her transition from this life.  Lila was intelligent, loving, generous, witty, and fun.  She had a great sense of humor and was fun to be around.  She loved children and animals and they instantly loved her.  She made sure to feed & provide water for the birds at her home and the raccoons often got a few leftovers for dinner.  Thomas cat made his way to her home as a tiny abandoned kitten and always got the best treats of all.  Lila was strong and independent and believed in equal rights for all people.  She practiced that in her life by treating all she met with kindness and as she would want to be treated.  As a woman working in an office since the late 1950's, she experienced harassment and discrimination, saying, "When a man called you into the file room, he wasn't just looking for a file, and if you didn't go along with it, then you'd be looking too - for a job".  In an effort to make change for the benefit of herself and for others, she did what she could whenever she was to improve the lives of others.  She was a wonderful mother, grandmother, wife, friend, and family member.  She will be greatly missed!!

The family of Lila Louise McKay created this Life Tributes page to make it easy to share your memories.

Send flowers to the McKay family.