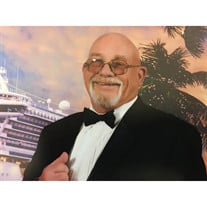 Larry died peacefully in his sleep in the early morning hours of February 4th, 2019.  He was determined to be at home watching Tom Brady win another Super Bowl with his family around him.  Larry got his wish.  He was 81 years old. Larry was born to Lawrence and Helen Navarra "Chick" Adams in 1937.  He grew up in Sonora, California with his two sisters, Darlene (Beller) and Carole (Roberts).  After graduation from Sonora High School, he began raising his three young sons, Larry Jr., Richard and Craig in the Bay area.  Here he also started his long 39-year career at Crown Zellerbach Paper Company.  In 1974, he relocated to Oregon City with his family, where he continued making paper until the mill closed in 1996.  He then started working at RSG Forest Products as a watchman for the next 22 years.  It was here that in 1998, he met his current wife of 17 years, Jerri, and they married in 2001.  Through this marriage, Larry gained two more grown sons, Josh and Jake. Larry and Jerri started their worldly travels after he was bitten by the "cruise bug" while on their honeymoon.  Over the years, they traveled to 54 different countries, including his favorites, a China river cruise and a trip Down Under to "Awesome-stralia" as Larry liked to call it. The true highlight of his life was his family.  "Grandpa Shorty" looked forward to every minute he got to spend with his grandkids, Little Larry, Daniel, Tyler and Katie, and his step-grandkids Kyle, Gabriel, Oona and Grayson. He was very proud of all of them. Larry will always be remembered for his wit and fun spirit.  Jerri converted him from a Raider fan to a Seahawks fan, and he thought Russell Wilson was one of the best.  Go Hawks! Larry enjoyed going out to eat at his favorite local restaurants, reading history books, doing word puzzles, watching the news on TV, and trying to beat Jerri at Jeopardy while enjoying a glass of red wine. Survivors are wife, Jerri; sister Carole Roberts; sons Larry Jr. (Rose), Richard (Tami) and Craig (Joanie); step-sons Josh (Danyelle) and Jacob; seven wonderful grandkids and one great-grandbaby.  Missing him, too, is his fur-baby, Matty, the rescue Bichon. He is preceeded in death by his parents, sister Darlene and grandson "Little Larry". Celebration of his life will be held on Sunday, February 17, 2019 at 2pm at the Tumwater Ballroom on the 3rd floor of the Museum of The Oregon Territory - 211 Tumwater Dr. in Oregon City.  Reception to follow.

Larry died peacefully in his sleep in the early morning hours of February 4th, 2019.  He was determined to be at home watching Tom Brady win another Super Bowl with his family around him.  Larry got his wish.  He was 81 years old. Larry was... View Obituary & Service Information

The family of Lawrence "Larry" Dee Adams created this Life Tributes page to make it easy to share your memories.

Larry died peacefully in his sleep in the early morning hours...

Send flowers to the Adams family.