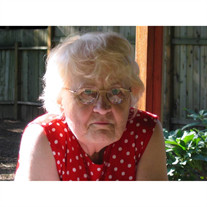 KOSSLER, LaVerne Stella, was born May 1, 1927 in Chicago, Illinois, the second of four daughters born to Stanley Kossler (born Stanislaw Kluskowski) and Frances Zmijewski (born Frances Zmezewski).  The surname was later changed to Kossler in 1944.  She passed away peacefully on June 23, 2021 in Tualatin, Oregon, at the age of 94, with her daughters by her side. LaVerne (baptized Veronica) Kossler attended Annunciation Elementary (Catholic school) and Wells High School (a public school) in Chicago, Illinois.  While age 19, she left a war factory job in Chicago and traveled alone by train to San Francisco, California, via Oakland.  She married Charles B. Dickenson in 1950.  They were the parents of three daughters, Deborah, Donna, and Judith.  They were later divorced. She married Roland W. Will in 1960 and the family moved to Oregon.  He passed away in 1977. A career in Library Science began in Lakeside, Oregon, at the Lakeside Elementary School.  She later moved north to a log house built in 1932; located on a 221-acre farm in Gaston.  She became the secretary/librarian of Farmington View School outside of Hillsboro, Oregon.  Having a daughter with Down Syndrome, LaVerne became a champion and lifelong advocate in the struggle to find appropriate services and housing for developmentally disabled individuals. She was hired by the City of Sherwood, Oregon, to start the Sherwood Library, and given the basement of a house, which was also occupied by the City Hall and Police Department.  LaVerne gathered a group of people to form the Friends of the Sherwood Library, who raised money for a new library, which was erected during her term as librarian.  April 24th was designated as LaVerne Will Day in Sherwood, Oregon.  Then, at the age of fifty-five, LaVerne earned a Bachelor of Arts degree in Humanities from Marylhurst University in Marylhurst, Oregon. She married William Melton in 1986.  They were later divorced. Following her retirement, LaVerne moved to Garibaldi, Oregon.  She was active in the Tillamook Genealogy Study Group, and was president for two years.  During that time, she co-compiled a list of genealogy holdings in Tillamook County for the study group.  She also served on the Tillamook County Library Board.  LaVerne was a loving mother and grandmother, and cherished her time with her family.  She was compassionate, kind, intelligent, and was known for her sense of humor.  She touched many lives in a positive way. She was preceded in death by her parents; daughter Donna M. Dickenson; husbands Roland W. Will, Charles B. Dickenson, and William Melton; sisters Lorraine S. Piasecki (Frank), and Virginia Allen (Harold). LaVerne is survived by her daughters, Deborah M. (Russell) Menenberg, and Judith A. (Jerry) Ackaret; granddaughters Emily "Amy" Cummins and Brianna D. Ackaret; her sister Rose M. McFadden; as well as many nephews and nieces and their children.  As requested, LaVerne will have a graveside service.  Services will be held on July 1, 2021 at 11:30 AM at St. Anthony's Catholic Cemetery, 11585 SW Gaarde Street, Tigard, Oregon 97224, with Father Maxy D'Costa officiating.  Holman-Hankins-Bowker & Waud Funeral Home in Oregon City, Oregon, are in charge of arrangements.  In lieu of flowers, the family suggests donations be made to Edwards Center, Inc. for adults with developmental disabilities.  The website is www.edwardscenter.org.  Click on the donation button, or you can send a check to Edwards Center, Inc., PO Box 6269, Aloha, Oregon 97007-0269.  Please designate "In memory of LaVerne Kossler, mother of Donna Dickenson."  The family appreciates your kind thoughts and prayers.

The family of Laverne S Kossler created this Life Tributes page to make it easy to share your memories.

Send flowers to the Kossler family.