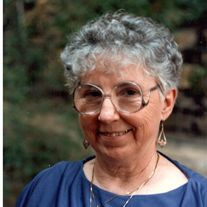 LaRose Finnerty Mueller Murphy, affectionally known as "Gram"Born in Peabody, KS on December 7, 1924, to Marie Finnerty, LaRose spent her youth in Kansas with her mother and step-father Ed Mueller. At age 18, she adopted Ed as her father and took his last name. LaRose and her family moved to Portland, OR to work in the ship yards during World War II. LaRose quickly qualified for her welder's certificate and began work on our country's naval fleet. While in Portland, she met her future husband Joe A. Murphy and they were married on May 7, 1945. Nine months later they welcomed their first daughter Lana Dayle Murphy, and their second daughter Patricia JoAnn Murphy three and half years later. They moved to their permanent residence in Gladstone, OR in 1949.December 7, 1941 was a day declared to live in infamy, but for LaRose, it was simply her birthday. With men going to war, she was hired to perform the bookkeeping and to act as the parts manager for a local car dealership in Kansas. At just 17 years of age and receiving $35.00 a month, she had become the highest paid woman in her town. She built on that accounting experience and worked in the automotive industry from the early 1950's until she retired at age 76. She was extremely active in the International Toastmistress Clubs (now called International Training in Communication), Credit Womens breakfast club, and was a certified parliamentarian and a life member of the National Association of Parliamentarians, as well as a life member of Eastern Star. LaRose loved to travel, spend time with her family and friends and enjoyed social gatherings. She was honest, generous, highly intelligent and known for her quick wit and sage advice. She was a mother and grandmother to many more than just her adoring family and readily accepted people into her life and heart.She was preceded in death by her husband Joe and her daughter Lana. She is survived by her daughter Pat Achong, son-in law Mike Achong, grandchildren Andrew Vilcauskas, Lanakila (Adrian), Joey (Kaili) and Kekoa (Cris) Achong, great grandchildren, Drew, Ivan and Alex Vilcauskas, Amaya Malusky and Keani and 'Onipa'a (Oni) Achong.Her family wishes to recognize and thank the individuals that assisted with her care over the last several years; Shirley Conrow, Delberta Beck, Taylor Kaps, Victoria Pace and Diane Kliese as well as the loving support of Dana and Alena during her final days. Her daughter Pat recognizes that caring for our parents and grandparents is a labor of love that requires the support of all family members and wants her family to know that she appreciates their contributions, love and support over the years. LaRose's grandchildren and great-grandchildren wish to recognize Mike and Pat Achong, who ensured that Gram was well cared for and deeply loved until the end.

LaRose Finnerty Mueller Murphy, affectionally known as "Gram"Born in Peabody, KS on December 7, 1924, to Marie Finnerty, LaRose spent her youth in Kansas with her mother and step-father Ed Mueller. At age 18, she adopted Ed as her father and... View Obituary & Service Information

The family of LaRose M Murphy created this Life Tributes page to make it easy to share your memories.

Send flowers to the Murphy family.