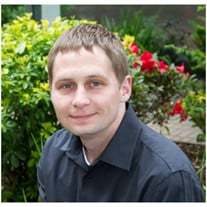 Joseph Russell Donkers was born on Sunday, November 2nd, 1980 in Newberg, Oregon. He left this life on June 5, 2016 in Portland, Oregon. Joseph is survived by his wife, Alissa Ann (Rollins) Donkers, his daughter Emily Rose Donkers, his parents Jay and Brenda Donkers, his sister, Jessica (Donkers) Robbins and his beloved cats, Sabrina and Penelope.  Joseph spent his early years on Circle Diamond Cattle Ranch in Estacada, Oregon. He loved to play and explore  around the ranch and play and swim in Clear Creek with his sister. As an adult, he fondly remembered  his early years on the ranch. During Josephs' grade school years in Creswell and  Oregon City he began his lifelong love of sports. He played baseball, basketball, wrestled, played golf and skateboarded. You name the sport, he loved playing and watching it.  He enjoyed going with the family to the EMS baseball games in Eugene. Joseph was always very competitive. Joseph met the love of his life, Alissa, in 2007. They shared their first kiss on Cinco de Mayo in 2008 and Joseph finally asked her to marry him in 2010. Joseph and Alissa said their  vows on May 5th, 2011. Joseph was so in love with her and she brought him so much happiness. Joseph enjoyed hiking, cooking, basketball, attending OSU Beavers football games with his dad, and spending time with his family, especially family barbeques. Joseph will be remembered fondly for his kindness and warmth and his willingness to lend a hand when anyone needed help. Joseph  made us laugh again and again and was always fun to be with. Joseph will never be forgotten.

The family of Joseph Russell Donkers created this Life Tributes page to make it easy to share your memories.

Send flowers to the Donkers family.