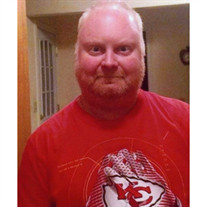 Jon Einar Lindstrom passed away in his home in Gladstone, Oregon on May 16th 2020 at the age of 54. He is survived by his fiancé of 19 years, Kim McFall, and her 2 daughters: Haley Gibson and Jordan McFall.  He is also survived by many nieces and nephews and great nieces and nephews. Jon was born in Portland, Oregon on February 2nd 1966 to Arne (passed 2013) and Virginia (passed 1996) Lindstrom. He was the youngest of 5 children, Paul Lindstrom, Judy Doblie, Kathy Priest, and Kris White. As a young boy he was diagnosed with Scoliosis and spent time in Shriner's Hospital. He had 2 surgeries to correct this. He also wore a body brace for many years.  His dad, Arne, and he participated in a YMCA program called Indian Guides.  He learned to play drums in grade school and continued this through high school. He graduated from Clackamas High School in 1984. One of Jon's first jobs was at a Dairy Queen; he claimed he invented the Blizzard. Jon also worked at the Portland airport cleaning airplanes. Then he went to work for Thrifty Auto Parts. Finally in 2013 he started a new job at Enviro-Clean Equipment Inc., until he passed. Jon and dad (Arne) went on several adventures after mom (Virginia) passed away.  They traveled to Chicago by train, went to a Seattle Seahawk game, and flew to Sweden to see where dad (Arne) was born and to meet relatives.  He met Kim In January 2001.  Their first date was at a family Super Bowl party where he also met the girls who were 7 ½ and 2 ½, followed shortly by his birthday party on February 2n.d. And love was born. Jon's greatest passion was football and family. He was a huge Kansas City Chief fan with a large collection of memorabilia. He could also be seen wearing one of his many pairs of Vans shoes.  He was very involved in raising Kim's girls from a young age.  They enjoyed the beach, camping, car and dirt bike races, concerts (Ozzie Osborne was his favorite), and family time together.  He was deeply loved by all who knew him. A memorial service will be held on Saturday May 15, 2021 at North Clackamas Park at 10 in the morning.   In memory of Jon contributions may be sent to Shriners Hospital for Children.

Jon Einar Lindstrom passed away in his home in Gladstone, Oregon on May 16th 2020 at the age of 54. He is survived by his fiancé of 19 years, Kim McFall, and her 2 daughters: Haley Gibson and Jordan McFall.  He is also survived by many nieces... View Obituary & Service Information

The family of Jon Einar Lindstrom created this Life Tributes page to make it easy to share your memories.

Jon Einar Lindstrom passed away in his home in Gladstone, Oregon...

Send flowers to the Lindstrom family.