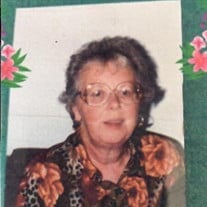 Joan Lulu (Dale) Mize May 7, 1933 - April 22, 2022 Born in Oregon City, Ore., living in West Linn, Ore. Joan Mize passed away Friday, April 22, 2022, peacefully in her sleep in the house where she was raised in West Linn, Ore. She was being cared for by her two sons Jerry Mize and Terry Mize for the last five years. And by hospice for the last four months. A graduate of West Linn High School in 1951. She met her husband Edward Marion Mize on a blind date while he was in the Air Force, stationed at the Air Wing at Portland Intl. Airport in 1953. They were married six months later. And moved to his hometown of Clarksdale, Miss. While there they had a daughter Cathy Lou Mize, Dec. 2, 1954. Then on Dec. 29, 1955 they had twin boys Jerry Edward and Terry Marion Mize. After four years they moved to Lake Oswego, Ore. Then in 1959 they moved to West Linn, only four blocks from her parents and where she was raised. Joan was a stay-at-home mother and babysat neighborhood children. She loved everyone and everyone loved her. She was known as Joanie Mize, mom, Aunt Joan or Grandma. Joan is survived by her younger brother, Jim Dale and his family from Oregon City; and her children, Cathy Manning of Gladstone, Ore.; and Jerry and Terry Mize both of West Linn, Ore.; five grandchildren; and five great-grandchildren with another one due in October of this year. She is and will be greatly missed by everyone who knew her. She will be placed in Willamette National Cemetery with her husband Edward Marion Mize. A memorial service is planned for Ip.m., May 9, 2022, at Holman-Hankins-Bowkér & Waud in Oregon City. In lew of flowers Joan requested donations be made in her name to The Oregon Kidney Foundation. A social gathering will be held afterwards at the family home in West Linn. ( Sunset area ) 2708 Sunset Ave.

The family of Joan Lulu Mize created this Life Tributes page to make it easy to share your memories.

Send flowers to the Mize family.