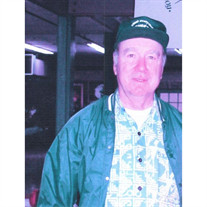 Jerald Alvin Shroyer 11/24/1932 - 11/9/2017 Jerald Shroyer was truly a man of the earth, working as a bank manager but devoting his passion to his gardens and orchards. Born November 24, 1932, in Corvallis, Oregon, to Doris Hart and Gail Shroyer, Jerry spent his happy childhood at Eddyville and then at the family farm in Philomath now known as the Gathering Together organic farm. Jerry and three younger siblings enjoyed swimming in the adjacent Mary's River, and he graduated from Philomath High School in 1951. His earliest memory is of walking in the orchard of his grandfather, Silas Hart (who planted many of the farm orchards in the valley), and having Silas pick and slice an apple for him. Silas taught Jerry at a very young age to graft fruit trees. Jerry looked like Silas and had his serene disposition. Jerry served in the Korean War, studied under First Interstate Bank's training program for 3 years at Oregon State University, and then worked for the bank.  He married Joline Sandau in 1972 and became stepfather to her three daughters. In 1975 the family moved to acreage outside Canby where Jerry grew produce, berries, figs, persimmons, grapes-and "collected" over 100 different fruit trees. He and Joline joined the Home Orchard Society in 1976, he serving as president 4 times. When he appeared and felt so healthy, it was a shock the night of 11/09/17 for Jerry to die of an unsuspected heart attack. He is survived by Joline, step-daughters Terrie Rees of Meridian, Idaho, Sherrie Sandau of Portland, and Deanne Young of Boring; granddaughter Bree Carlson and great-grandson Quinn, of Portland; sister Louise Marstall of Albany, brother Jim Shroyer of Philomath; and many nieces and nephews. Jerry's funeral is 11:00AM, Saturday, November 18, at Holman-Hankins in Oregon City, interment in Canby Zion Cemetery.  He was a kind and wise man, fortunate to live almost 85 good years knowing he was loved by wife and family and enjoying his farm, OSU Beaver games, a "play house" by the ocean, and regular trips to Bend and Hood River-a good life, well lived! A celebration of life will be held on Saturday, November 18, 2017 at 11:00AM at Holman-Hankins-Bowker & Waud in Oregon City. In lieu of flowers, donations can be made to Home Orchard Society.

Jerald Alvin Shroyer 11/24/1932 - 11/9/2017 Jerald Shroyer was truly a man of the earth, working as a bank manager but devoting his passion to his gardens and orchards. Born November 24, 1932, in Corvallis, Oregon, to Doris Hart and... View Obituary & Service Information

The family of Jerald Alvin Shroyer created this Life Tributes page to make it easy to share your memories.

Send flowers to the Shroyer family.