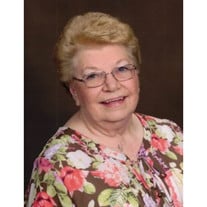 Janice was born April 18, 1933, in Lincoln, Nebraska to Agnes Marie Eberhardt Robertson and Charles Edward Robertson.  She was the second of three children, older brother Lowell and younger brother Myron.  She grew up with her brothers and the large Robertson family of aunts, uncles, cousins, in Lincoln. She graduated from Union College Academy in 1951 with the dream of becoming a nurse. Sometime in 1952-1953, at the urging of her best friend Elaine Able, she left Lincoln, drove on her own, and moved to Portland, Oregon.  She worked as a nursing aide in area hospitals, and eventually began working for Dr. Theodore Lathrop as his nurse/office assistant in Oregon City.  She met Clarence Cook, an ambulance attendant for Buck Ambulance, when a friend needed to be taken to the hospital.  She rode along in support of her friend, and as the story goes, Clarence tried to bill her for the ride, which did not impress her.  In the end he won her over, Clarence and Janice were married October 23, 1955 at Central Lutheran Church in Portland, Oregon. They first lived in Portland, and then later settled in Gladstone, where they raised their family of five children. She was active in the school and community, serving as room mother and PTA chair.  She also went back to college and completed her associate degree from Clackamas Community College as an early childhood disability therapist.  She worked for over twenty years for Multnomah County Health Department and used her talents as a mother to help other parents of disabled children.  She retired and moved to Vancouver, Washington where she was busy with friends and being a grandmother of her six grandchildren.  Janice is survived by her children, Janna Cook (daughter) of Gladstone, Oregon; Renee and Chuck Mott (daughter and son-in-law) of Beavercreek, Oregon; Betty Hibbs (daughter) of Billings, Montana; Ted and Tracy Cook (son and daughter-in-law) of Columbus, Ohio; and grandchildren, Andrew Barrett, Mark Barrett, Kate Hibbs, Rick Hibbs, Courtney Cook, and Caitlyn Lewis.  She is preceded in death by her husband, Clarence F. Cook (1975) and her son Christopher Cook (2015). She is also survived by her brothers, Lowell Robertson of Riverside, California and Myron Robertson, of Lincoln, Nebraska, many cousins, nieces, nephews, and grandnieces and grandnephews. She was a mother and grandmother to many, family or friend.  She was laid to rest at Willamette National Cemetery with her husband Clarence Cook. A celebration of life will be held when allowable.  Please feel free to leave stories of Janice, how she inspired or touched you, which can be shared at that time. Thank you for your kind thoughts and prayers, The Cook Family, Janna, Renee, Betty and Ted

Janice was born April 18, 1933, in Lincoln, Nebraska to Agnes Marie Eberhardt Robertson and Charles Edward Robertson.  She was the second of three children, older brother Lowell and younger brother Myron.  She grew up with her brothers and the... View Obituary & Service Information

The family of Janice Evangeline Cook created this Life Tributes page to make it easy to share your memories.

Send flowers to the Cook family.