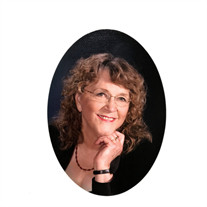 Janet Kathleen Walters Dunfee September 2, 1942-December 17, 2017 Janet Kathleen Walters Dunfee, a resident of Oregon City since 1999, died in hospice care with family at her side, the morning of December 17, 2017, after years of battling a progressive disease and chronic pain. In the face of hardship and suffering, she regularly said "I choose joy", and lived her life fully! Now she knows the eternal joy of the fullness of God's loving presence. She was a person of deep faith and great courage. Janet was born September 2, 1942, in New Haven, Connecticut. Her parents, Bill and Aslaug Walters,  moved back to Norway in the early 70s. Janet was quite proud of her ethnic heritage and ability to speak Norwegian. She graduated from New Haven High School and took classes at Yale. She moved to Tucson, Arizona, where she lived until 1977, working as a banker and rising to the position of Customer Services Representative, a position she helped define, allowing her to do community outreach with underserved customers such as the elderly and migrants. Janet married Scott Dunfee, March 13, 1976, who adopted her children, Pete and Wendy. As the spouse of an ordained Lutheran Pastor and U.S. Navy Chaplain, Janet and her family lived in Richmond, Pleasant Hill and Bay Point, California and then Oregon City, Oregon. She served in many leadership roles in churches in California and Oregon, but her joy and passion was as a member of the choir, contemporary worship team, community chorus and as a soloist. She was a most supportive military spouse throughout Scott's 22-year career, including a deployment to Afghanistan, with Janet managing the household and re-modeling their home in his absence. Janet loved to read, sew, quilt, knit, bake, play word games and computer games, research to learn new things, and make and send cards. She was a caring friend and good listener. She exemplified generosity, hospitality and inclusivity. She had a great sense of humor. She was devoted to prayer for peace and justice in the world and for the help and healing of countless numbers of individuals whose names were on her prayer lists. She touched so many people in a positive way. She loved her family dearly. Janet is survived by her husband, Scott; her children, Robert (Carol), Peter (Xinia) and Wendy; grandchildren, Steven, Rachel, Brooklynn, Andre and Fernanda; great-grandchild, Liam; her siblings, Ruth (Vern), Paul (Sharon), and Elna (Torolf); Cousin, Dirk; and many nieces and nephews. A member of St. Stephen Lutheran Church in Gladstone, Janet's memorial service will be at St. Stephen (290 W Gloucester St., 97045) on Saturday, January 6, 2018, at 7pm. In lieu of flowers donations in Janet's memory may be given to the St. Stephen Memorial Fund.

The family of Janet Kathleen Walters Dunfee created this Life Tributes page to make it easy to share your memories.

Send flowers to the Dunfee family.