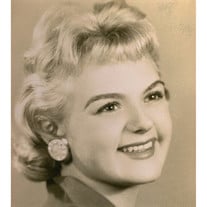 Helene Elaine Keep was born on December 12, 1937 at Fort Riley, Kansas to Edward William Hines and Nancy Fern Hines (Simpson). Helene passed from this life to be with the Lord on December 23, 2021 at the age of 84. Helene's lifetime love of horses began early, as her father was in the acclaimed 2nd Cavalry Regiment "Dragoons" before the War Department abolished the last mounted army units in 1942. As a child, Helene's parents Ed and Nancy rode and trained Tennessee Walking horses. As a toddler, Ed found Helene sitting under a large stallion, happily patting the horse's belly, unaware of the potential danger. Helene became an accomplished rider, competing in horse shows and drill teams, and rode her Paso Fino horse "Jerez" in the Portland Rose Festival parade. Helene attended Van Nuys High School in Southern California, surrounded by movie stars of the time. Helene's mother Nancy worked at the famous Brown Derby restaurant in Hollywood, where John Wayne frequented. Helene was a camp fire girl in Los Angeles and Dale Evans (actress and wife of Roy Rogers) was her campfire girl leader. She also loved music and singing, and was part of her Van Nuys High School glee club (along with the late actress Natalie Wood). Helene became the lead singer for the Dana Trio musical group in the 1950s, performing at clubs and other venues. After high school, she met and married Max Panetta in 1957. They had two daughters, Kristy and Kim. Helene became an artist and art teacher, specializing in oil and watercolor paintings. She studied art appreciation at Pierce College, and learned oil painting from the notable Russian artist Sergei Bongart, and studied under Virginia Lynn, renowned for her work in seascapes. Helene was inspired by these artists and she became known for her beautiful seascapes, landscapes, and still life artwork. Helene loved to paint on location, and would often set up her easel to capture the shoreline of the Pacific Ocean off the coast of California. She was Program Chair for the Simi Valley Art Association, and her work was displayed and sold in art galleries across Southern California and Santa Barbara. She taught art classes to adults but her passion was in teaching art to children. In addition to teaching in Southern California, Helene later taught art classes at the Clackamas Community College and Mac's Arts and Crafts. Following a divorce, Helene moved to Oregon in 1973 with her two daughters, where she later met and married James Keep on June 29, 1978. They lived at their 46-acre rural home in Oregon City, Oregon, where her husband Jim still resides today. Helene was an avid gardener, landscaping her home with beautiful roses, peonies, dahlias, irises, and more. She also had a large vegetable garden and would cook the most wonderful meals. Lucky were the stray dogs that found their paths cross with Helene, as they were loved and spoiled in their new forever home. Helene was a much beloved daughter, wife, mother, and grandmother. She is preceded in death by her parents, Edward and Nancy Hines. Helene is survived by her husband James Keep, her daughters Kristy Norton and Kim Monbarren, her stepsons Jim Keep, Jr., Jay Keep, and Jan Keep, grandchildren Justin Plummer, Lisbeth Duong, Tricia Dorney, Sam Keep, Merissa Keep, Abigail Keep, Hayden Keep, and Ryan Keep, as well as nine great-grandchildren (Caleb, Wyatt, Jonas, Alena, Madison, Jasper, Sevari, Paisyn, and Mercer).A Graveside service for Helene will be held at the Willamette National Cemetery on January 18, 2022 at 10:00 a.m.

Helene Elaine Keep was born on December 12, 1937 at Fort Riley, Kansas to Edward William Hines and Nancy Fern Hines (Simpson). Helene passed from this life to be with the Lord on December 23, 2021 at the age of 84. Helene's lifetime love of... View Obituary & Service Information

The family of Helene Elaine Keep created this Life Tributes page to make it easy to share your memories.

Send flowers to the Keep family.