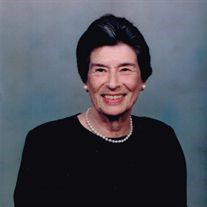 Helen M. Hopkins (age 95) beloved wife, mother and parishioner passed away at home on March 20, 2015. Predeceased by her husband Richard in 1989, she is survived by four sons, Thomas (Miyuki), Jonathan (Kathy), James (Janice), and David (Gretchen). Seven grandchildren Jason (Wendy), Shawna, Richard, Riki, Renee (Michael), Ray and Maya, four great grandchildren, and one great, great grandchild.Helen was born in 1919 in St Maries, Idaho. The family moved to Moscow, Idaho in 1920 and on to Orofino, Idaho in 1933. She graduated from the University of Idaho in 1942 and went on to train as a physical therapist at the Mayo Clinic and later served at the Bushnell Army Hospital in Utah. After moving to Oregon, she headed the Physical Therapy department at Oregon State Hospital and clinics.Meeting for the first time in high school, she would later marry her beloved Richard in 1943. Along with raising her sons, she steadily guided the events of our family's life with tireless energy, deep compassion and true grace. Many of our friends found a second mother as they joined us in our daily lives. Many others would experience the same during her years as a den mother. In her personal time, she enjoyed gardening, which at one point grew to near a quarter acre, caring for the yard and reading an astonishing number of books.She began her extended family at St. Paul's Episcopal, Oregon City in 1953 serving in every imaginable way. As a Sunday school teacher (a favorite), countless rummage sales, kitchen duty, search committees, food pantry, thrift store, faith alive, prison fellowship, Jews for Jesus, prayer group, vestry, alter guild, prayer chain and so much more. Most personal to her was (through God) the many relationships where she warmed hearts as they warmed hers.A memorial celebration of life service will be held at 1 pm Friday April 24th at St. Paul's Episcopal Church in Oregon City. In lieu of flowers, remembrances may be given to St. Paul's or to the charity of your choice.

The family of Helen Maxine Hopkins created this Life Tributes page to make it easy to share your memories.

Send flowers to the Hopkins family.