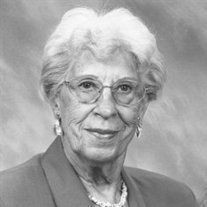 Florence Mae Rasmussen (Templeton)May 5, 1914- September 1, 201399 yearsFlorence Rasmussen (Templeton), lifetime Oregonian, passed away peacefully last Sunday night, surrounded by family and love, in her granddaughter's Oregon City home where she lived out her final years. Florence was an honored family matriarch, a stalwart in her community and left behind quite a legacy. She was born in 1914 in Garden Home, Oregon to Otto and Minnie Johnson. Florence spent most of her life in the Garden Home/ Multnomah area of Portland and Wilsonville. She was a Lincoln High School Girls' Polytechnic graduate. Florence met and married her husband, Irving Frank Templeton, on September 21, 1935. The two lived in a tent for quite some time while constructing their Multnomah house, purchasing the building materials with cash as they had it. Florence and Irv adopted two children, Larry and Julie Templeton. They remained together 44 years until Irv passed away in 1979. Florence was an accomplished woman. She was a lifelong member of the Eastern Star Orenomah, Tigard Chapter. She also enjoyed her decades- long membership in the Quadrille Club beginning in the 1930's and remained in contact with many of those friends until her last days.Florence gave tremendously to her community and country, honoring her pledges to her church, serving Meals on Wheels for years, and "being there" for anyone that had a need. She served as a civilian employee for the US Navy while her husband Irv was stationed in New York during WWII. Upon returning to Oregon after Irv was honorably discharged, she served as a Red Cross nurse at the Portland VA hospital, caring for wounded soldiers. Florence's continued service to her community and country can especially be seen in her heavy involvement in a Wilsonville organization called "Mothers of Servicemen" during the Vietnam War era. She helped collect, create, and ship cans packed with Christmas goodies and necessities to service members that were overseas on active duty. She still has letters of gratitude that the organization received from many of those service members among her cherished memorabilia. Florence loved people and loved life. She gave her time and resources liberally. She consistently availed herself to family members and friends, caring for children and grandchildren, sharing her property on the Oregon Coast, providing countless rides to medical appointments, opening her home to the displaced, delivering meals to homebound seniors, graciously hosting every holiday gathering. Florence religiously visited the grave site of EVERY immediate and extended family member on memorial day, leaving flowers from her abundant garden that she had nurtured and grown. She lived an abundant and fulfilled life. She had so much fun, vacationing multiple times in Hawaii, visiting Alaska and cruising the Caribbean, hunting and camping in Southern Oregon, and traveling nearly weekly to her trailer at Rockaway beach. Florence loved to play card games and poker, square dance, swim, bake, see her children and grandchildren perform, decorate for the holidays, paint, garden, sew, document family history, and spend time with family and friends. She was "green" before green was cool, never created waste, and learned to turn the old and worn out into new and useful. She was incredibly disciplined and frugal and always had an abundance to share with others. Her love lives on.Florence is survived by her daughter, Julie Klink of Portland, grandchildren Joanna (and Christian) Bewley and their children Jacob, Destiny, Caleb and Jonathan; Jennifer (and Andy) Holman and their children Robert, Samuel, Nathaniel and Sebastian; Jessica (and Mike) Cavanaugh and their children Jaydea, Ariana, Isabella and Elijah; David Templeton and his sons Jack and Hunter, and Tracy Normoyle and her children. Florence is also survived by nieces and nephews Deb Buzdor, Terry Johnston, Dan Johnston, Jean Youngbar, and Linda Cantel. Florence left behind a dear friend of over 70 years, Verlene (Tate) Erickson. Florence was preceded in death by her mother and father, Minnie and Otto Johnson, her husband Irving Frank Templeton, her son, Larry Templeton, her second husband, Erling Rasmussen, and her sisters Evelyn Johnston and Dorothy Youngbar.Florence wishes for remembrance to be made to Multnomah Presbyterian Church of SW Portland (7555 W 45th, Portland, Oregon, 97219) where she was a faithful member for 57 years. Flowers are also welcome and should be delivered to Holman- Hankins- Bowker & Waud, 715 7th St. Oregon City, OR, 97045A graveside service will be held on Tuesday, September 10, 2013 at 12:00PM at Willamette National Cemetery, 11800 SE Mt. Scott Blvd. Portland, OR, 97086

The family of Florence Mae Rasmussen (Templeton) created this Life Tributes page to make it easy to share your memories.

Send flowers to the (Templeton) family.