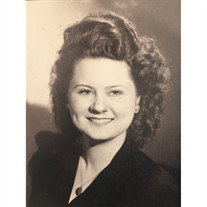 Eva Pauline Jenkins Morrison of West Linn, Oregon slipped peacefully into the arms of God and previously departed family the afternoon of Wednesday, January 4, 2017 at the age of 92 after a short but rapid decline in health. Pauline leaves behind a legacy overflowing with wonderful memories of love and dedication to her family, faith, and friends. Born July 6th, 1924 in Christian County Missouri to the southern Missouri generational farming family of Lloyd and Rebecca Jenkins, she was the youngest sibling of five sisters and two brothers. Mom relished the relationships with her large extended family to include not only her siblings, but that of her numerous nieces, nephews, and cousins, many of whom were close to her own age.  Mom attended a one room school serving grades 1-8 near her farm, later to graduate from Rogersville High School in 1943. Upon graduation, she taught one year as the only teacher of the nearby McHaffie school, which also served grades 1-8. She found keeping the older unruly boys in line quite challenging, and as a 19 year-old with WWII in full swing, she adventurously relocated to Los Angeles California in order to work at the North American Aircraft Defense Factory producing P-61 Black Widow night fighters. With another close friend, these two girls took a vacation bus to Oregon, where Mom was attracted to the smaller size and slower pace of Portland, eventually relocating to the Martha Washington House, a boarding residence for single women in downtown Portland. A set-up blind date introduced her to our father, Richard Morrison and they were married June 12, 1952. The newlyweds eventually established their home in Oregon City near Dad's initial work station as an electrical engineer with Portland General Electric. A paramount prerequisite condition of marriage to Dad by Mom, was that as a couple and eventual family, we were to diligently attend church every Sunday. A pledge that was faithfully observed. They became active members of Oregon City First Baptist Church in Oregon City, later The First Evangelical Church of Oregon City, and upon their relocation to West Linn in 1976, one of the early families and life-long members of Rolling Hills Community Church in Tualatin, Oregon. In 1990, Mom retired after 21 years of service as a secretary and receptionist for the Clackamas County Mental Health Clinic. Mom's total joy were her two children and our families, that include seven grandchildren to which she was a constant source of love and affection. She is survived by her husband, Richard Morrison of 64 years of marriage, their daughter Melinda Susan Morrison Park of San Diego California, son Mark Richard Morrison of Austin Texas, son-in-law Alan Park, and daughter-in-law Nicole Morrison. Seven grandchildren; Aaron Alan Park, Alex Christopher Park, Austin Michael Park, Emily Rebecca Morrison, Nicholas Alexander Morrison, Lance Phillip Morrison, and Veronica Pauline Morrison. As a family, we share a lifetime treasure trove of countless family gatherings and wonderful holiday memories to include Dad's family of brother Dean Morrison of Portland, and sister Janice Murphy of Salinas, California. We are extremely grateful to Mom and Dad's fellow Rolling Hills Sunday School Class members, the wonderful neighbors of their 40-year residence in West Linn, and the staff of Suncrest Adult Care Home, all of whom demonstrated true Christian selflessness and loving care well beyond expectation during the rapid decline and final 90 days of Mom's life. We count it as a blessing that Mom and Dad were both able to enjoy so much of their full life together within their own home even as recent as this summer canning fruit and vegetables from their own garden. Mom was a classic example of southern grace and Christian living. An open house gathering for local friends and family will be extended at the J.D. Lee funeral Home, 7405 Ferrel Lane, Rogersville Missouri, between 6:00pm and 7:30pm on January 13th with committal the next day January 14th at 11am at the Springhill Cemetery, Christian County, Missouri per Mom's wishes. All are welcome. A Memorial Service for neighbors, friends, and family at a date and time later to be announced is planned for Rolling Hills Community Church, Tualatin, Oregon.

Eva Pauline Jenkins Morrison of West Linn, Oregon slipped peacefully into the arms of God and previously departed family the afternoon of Wednesday, January 4, 2017 at the age of 92 after a short but rapid decline in health. Pauline leaves behind... View Obituary & Service Information

The family of Eva Pauline Morrison created this Life Tributes page to make it easy to share your memories.

Send flowers to the Morrison family.