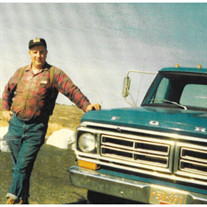 Eugene "Gene" Gilbert Fischer, 82, of Oregon City, Oregon passed away peacefully in his sleep on May 18th, 2016. Gene was born in Oregon City, Oregon on October 24th, 1933 to Gilbert and Lillian Fischer. Gene graduated from Oregon City High School in 1951. He then served in the United States Army from 1953 to 1956. Gene was involved member of his community, serving on the Redland School Board, Clackamas County Fire Board, the Oregon City Elks Club, and the Masonic Lodge. Gene, along with his sister, Arlene Fischer, were third generation owners and operators of Fischer Mill Supply- a local grocery, hardware store, tractor and farm equipment dealership. It was here that Gene's love for farm equipment, and farming grew over the years. Gene was always one to lend a helping hand. He was a generous, caring man that will be extremely missed by his family and friends. Gene is survived by his sister, Arlene Fischer, his son and daughter-in-law, Dean and Sheryl Fischer, his daughter, Carrie Fischer, his grandchildren, Chelsea Randall, Brady Fischer, and Tanner Fischer, and his great-grandchild, Grant Randall. Gene's Memorial Service will be held at 11:00 AM on Thursday, May 26th, 2016 at Holman-Hankins-Bowker and Waud Funeral Home, with reception to follow at the Barton Community Church Fellowship Hall.

The family of Eugene Gilbert Fischer created this Life Tributes page to make it easy to share your memories.

Send flowers to the Fischer family.