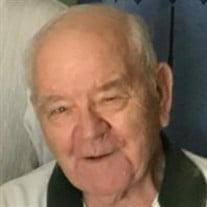 Ervin P. Welters, 88, passed away Wednesday, April 13, 2022. Ervin was born September 15, 1933, in St. Anna, Minnesota, the son of the late Peter J. and Mary (Bieniek) Welters. He was raised on a farm 5 miles east of Albany, MN. He was also preceded in death by brothers Allen Welters and Edward Welters, and only sister Rose (Fuchs) Welters. He served in the US Navy from 1951-1954, during the Korean Conflict. His duty stations included 9 months aboard the USS Wasp, an Aircraft Carrier, before transferring to the USN Seabee Naval Construction Battalion. After his honorable discharge from the Navy he returned to building and construction work in his home state of Minnesota. On October 20, 1954 he married the love of his life Phyllis Gobernatz, daughter of Joseph & Hildegard (Meier) Gobernatz. Together they raised and parented 9 children, 3 girls: Jeanette Anderson, Jane Marsiglia, and Ann Corwin; and 6 boys: Mark Welters, Stephen Welters, Kenneth Welters, Gregory Welters, Charles Welters, and Christopher Welters. Ervin enjoyed his vegetable garden, flowers & roses, but he most enjoyed his woodworking shop in his spare time and Saturdays. He designed, built and finished custom furniture as well as repairing antiques. His career was in retail & wholesale lumber-hardware-tool business which included buying, selling, inventory control, and management of operations. Ervin was a 4th Degree member of the Knights of Columbus and a member of the Holy Name of Jesus Society. He was always actively involved with the parish he attended, passing on a deep faith commitment to God and the Catholic Church. In lieu of flowers donations can be made to: Crosier Fathers & Brothers, PO Box 500, Onamia, MN 56359-0500. www.crosier.org Food for the Poor, 6401 Lyons Rd., Coconut Creek, FL 33073. www.foodforthepoor.org Funeral services will be held at St. John the Apostle Catholic Church, 417 Washington St., Oregon City, OR 97045, on Friday, April 22nd. The Rosary will be at 10:30am with the Mass of Resurrection at 11:00am.

The family of Ervin Peter Welters created this Life Tributes page to make it easy to share your memories.

Send flowers to the Welters family.