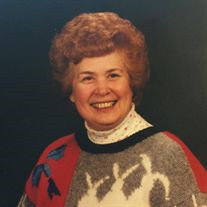 Eileen Jones Misley was born in Dodge, North Dakota, the fourth of five children born to her parents Fred and Bessie Jones. Her early childhood years were spent in Chandler, Minnesota. Like many families of that era, the family lost everything, including their farm in the great depression. In 1941 the family moved west to Portland, Oregon in search of a better life. Eileen graduated from Franklin High School and then attended Lewis & Clark College, earning first a bachelor's degree, and later a Master of Arts in Education. At college she met her future husband Robert Misley and they married in 1951. Together they had four sons; Robert, Michael, Jeffrey and Bradley. Teaching was Eileen's passion. She taught first and second grade at the Estacada Grade School for thirty years. Close to one thousand students passed through her classroom over the years. Eileen was an innovative and exceptional teacher, dedicated and devoted to her students. She was loved by her students.In her retirement, Eileen built her life around her grandchildren. Her home in Viola (the "farm") was a favored destination spot of the grandchildren, and the location of countless holiday events, and barbeques at the family swimming hole on Clear Creek. Eileen had numerous interests and enjoyed travelling, reading, quilting, gardening, birdwatching, and attending her grandchildren's sporting events.Eileen was known as "Mrs. Misley" to her students, "Grandma Een" to her grandchildren and "Mom" to her sons and daughters in law. She is survived by her sister Carol Walker of Portland, Oregon, her sons and daughters in law, Robert(Jacquie), Michael, Jeffrey(Mary Cay), and Bradley(Julia) , 15 grandchildren, and 4 great grandchildren. The family extends special thanks to Kelly Todd, Casie Misley and son Mike, who acted as Eileen's caregivers in her final years. It was their dedication that allowed Eileen to continue to live at home until her death on February 4, 2015. A memorial service will be held on February 21, 2015 at St. Stephen Lutheran Church in Gladstone Oregon at 11:00am. Remembrances to St. Stephen Memorial Fund.

Eileen Jones Misley was born in Dodge, North Dakota, the fourth of five children born to her parents Fred and Bessie Jones. Her early childhood years were spent in Chandler, Minnesota. Like many families of that era, the family lost everything,... View Obituary & Service Information

The family of Eileen Jones Misley created this Life Tributes page to make it easy to share your memories.

Send flowers to the Misley family.