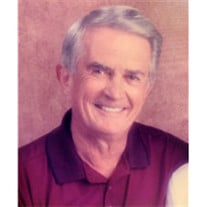 Dr. Edward Mark Gesley died July 24, 2019 at Bonaventure senior living facility in Tigard, OR where he had lived the last three years.The family is very grateful for the care he received from the staff and Bristol hospice. He was 86. Ed was a lifelong resident of Oregon City, where he raised a family and practiced dentistry from 1962 until retiring in 1999. He also served the community as a member of the OC school board 1966-1970. He had a special kindness and outlook on life, upon which he built a successful practice and was widely beloved as an outstanding dentist. He had a manner to put his patients at ease and many said that they loved going to see him. His outlook on life was an inspiration and his kind spirit, quick wit, and good humor were known to all. Even in his last years, he was ready with the one-liner that left those around laughing and amazed. Ed was born in Carus, Oregon, August 25, 1932; son of Bertha Gifford from hardscrabble Minnesota and Joseph Francis Gozefsky, an immigrant from Lithuania in 1890 as an 11-year-old with his brother Paul, 13 to the coal mines of Pennsylvania. Ed attended St. John's Catholic school and later Oregon City High. During this time,he met the great love of his life Karen Oswald.They married on July 10, 1954 and raised four children Mark, Mead, Susie, and Julie. Married for almost 60 years their love remains a great inspiration. Ed and Karen started their family in San Diego during his Navy service and then moved back to OC with a home in the Park Place, Clackamas Heights project. They moved to Rivercrest Parkin 1962. The neighborhood was a good place to raise a family. His humble background and compassionate nature were such that hewelcomed all who came to the house, locals and wayward souls alike. Ed's passion, beyond spending time with his family, was playing golf with Karen and friends at Arrowhead and throughout the west. He worked at the Oregon City paper mills to pay for his education at Portland State University where he studied engineering and was on the wrestling team. He served in the Navyfrom 1954-1957, based in San Diego, where the Dental Corps provided training and entrance to the Oregon Dental School in 1959. He graduated with a DDSin 1961. His practice was located in the Barclay building at the end of the old Oregon City Bridge. Education was a lifelong value. He was the youngest dentist to achieve his post-doctoral certification. His huge dictionary, with voluminous notes that he had made over the decades,remainsa source of wonder. Ed was predeceased by Karen in 2013, their son Mead in 1978, and Edward's brother Frank and sisters Jeanette, Eulah, and Margie.  He is survived by his children (and spouses): Mark (Wendy Goldsby), Susie (Jeff Mengis), and Julie (Jim Fisher); eight grandchildren, fivegreat-grandchildrenwithmore to come. A memorial service will be held 12 pm, Friday August 9 at Holman-Hankins-Bowker & Waudfuneral home followed by burial at Mt. View cemetery, and then a celebration of his life at the Museum of the Oregon Territory,all in Oregon City.

Dr. Edward Mark Gesley died July 24, 2019 at Bonaventure senior living facility in Tigard, OR where he had lived the last three years.The family is very grateful for the care he received from the staff and Bristol hospice. He was 86. Ed was... View Obituary & Service Information

The family of Edward Mark Gesley created this Life Tributes page to make it easy to share your memories.

Send flowers to the Gesley family.