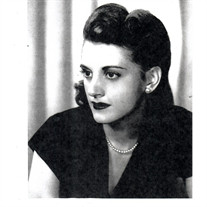 Dorothy June Vandiver died peacefully from "natural causes" on November 7, 2021, at Mcloughlin Place, in Oregon City at the age of 98. Born in Deadwood, South Dakota, on June 17, 1923, Dorothy experienced a full and interesting life.A childhood spent playing and running free on the prairies of South Dakota helped shape her life to be one of loving freedom, nature, and the customs of Native American people.She never forgot frequently attending art classes on a nearby Indian reservation; something none of her classmates had the opportunity to experience.After graduation from high school, where she proudly served as a marching drum player, she attended business school, where her training propelled her to a position in the secretarial pool for the FBI under J. Edgar Hoover in Washington DC during World War II.Once the war was over, Dorothy and a few friends moved to Los Angeles to enjoy its Golden Era, where she met and married Vincent Vandiver, her husband of 58 years (Vince died at the age of 97 in 2012.)Along their path together, Dorothy and Vince bought their 1st home in Encino, California and had three children: Robert (Bob) in 1955, Mary in 1957, and Bonnie in 1961. Bob, a retired MD, lives with his wife Maria in Tualatin. Mary, retired from the fashion and training fields, lives in Atlanta. Bonnie, a librarian, lives with her husband Paul in Oregon City. They are the proud parents of three of their own children: Christine, Eric, and Michael. Christine lives with her husband Spencer in Portland, while Eric and Michael live in Corvallis. Motherhood didn't slow Dorothy down, however...In 1960, she graduated with a degree from California State University, Northridge. A love of teaching led her to earn her elementary school teaching credentials, and she went to work for the Los Angeles Public Schools where she taught fourth and sixth graders for over 20 years.Even during that time, Dorothy didn't slow down.She was an avid church volunteer, and also volunteered at a regional hospital in the Emergency Room. She loved cooking and joined an international gourmet cooking club where she hosted dinners for members (and occasionally, if lucky, her family) to experience various cuisines from throughout the world. Her Christmas Eve Open House parties were renowned and heavily attended. Her love of learning about nature and plants resulted in her obtaining a certificate as a Master Gardner.Dorothy's love of art - and perhaps her greatest love of all - began showing publicly when she acquired grant funding to oversee multiple mural projects at various schools throughout Los Angeles County back in the 1970s.From there, Dorothy's love of art exploded in many directions...Throughout her 50s and 60s, she became as educated in the field as possible. She earned a Master of Fine Arts (MFA) from California State University at Long Beach and took numerous continuing education courses.She created art using different media:- Her welded metal abstract structures painted over with acrylic paint were some of her customer and family favorites.- She designed and produced metal jewelry using precious stones.- She had a special love of creating abstract acrylic paintings using very large wood- framed canvases.Symbolism was extremely prevalent and important in all of Dorothy's art, whether it was working out the aggressions she felt from life's hardships, or an affinity for Native American people.Her enormous talent, drew many invitations to show her works at various art galleries throughout the years in Southern California and later in Oregon.The earthquake of 1994 in Los Angeles almost completely destroyed Dorothy and Vince's home in Northridge. That event triggered their migration to Newport, Oregon to be close to Bob's and Bonnie's families and be in the State that they truly loved. They finally settled close to Bonnie and her family in Oregon City in 1997.Working in her art studio in her new Oregon City home, though in her ?Os , Dorothy confirmed that talent in art doesn't fade with age. She continued to create acrylic paintings on canvas, and her emerging art style from this era was on a smaller scale and using themes involving nature that were familiar to most eyes.A particular honor came when Dorothy, as a dying wish at the age of 96, was informed that the work of art she wanted to donate to the Confederated Tribes of the Grand Ronde was accepted and will be displayed at one of their main locations. "The Flute Player", a Native American-inspired diptych painted on two 88-by-82-inch canvases, was the submission in 1986 for Dorothy to receive her master's degree in fine art (MFA) from Cal State University, Long Beach. To honor her donation, she was recognized by the tribal leaders at a Grand Ronde Tribal Council meeting early last year.Zoom information for the service on the 26th.Join Zoom Meetinghttps://us06web.zoom.us/j/86776815329?pwd=Q0NrWHdu...Meeting ID: 867 7681 5329Passcode: 881704One tap mobile 13462487799,,86776815329#,,,,*881704# US (Houston) 17207072699,,86776815329#,,,,*881704# US (Denver)Dial by your location 1 346 248 7799 US (Houston) 1 720 707 2699 US (Denver) 1 253 215 8782 US (Tacoma) 1 312 626 6799 US (Chicago) 1 646 558 8656 US (New York) 1 301 715 8592 US (Washington DC)Meeting ID: 867 7681 5329Passcode: 881704Find your local number: https://us06web.zoom.us/u/kmKeZmZB1

The family of Dorothy June Vandiver created this Life Tributes page to make it easy to share your memories.

Send flowers to the Vandiver family.