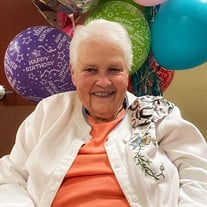 Doris Marie Dayog, 90, known for her kind eyes and gentle smile, passed away on Monday, March 7th, 2022, at Willamette View in Milwaukie, OR. Doris was born on October 22, 1931, to Clarence Kelton Rand and Leah Lenora (McGaughey) in Roseburg, OR. Her younger and late brother, Orville John Rand, was born 5 years later on July 18, 1936. She attended Roseburg High School, class of 1949 where she graduated 3rd in her class. She was the Vice President of the Commercial Club and was a member of the Alpha Kappa Honor Society. After graduation, she attended Northwestern School of Commerce in Portland, OR. She accelerated her 2-year course of studies, completing them after 1 year. After passing the Civil Service examination, she landed her first job as a Clerk/Stenographer for the U.S. Forest Service regional office in Portland. In 1950, she met Lou de Vera Dayog, at a church social. With existing discrimination of the times, Doris and Lou sought a friendlier, more accepting environment. In February of 1953, with $60 in her pocket, Doris traveled by Greyhound bus, on a 5-day trip to Philadelphia, Pennsylvania, the City of Brotherly Love. Lou was attending the University of Portland and would follow her after finishing the semester. They married on May 23, 1953. They had seven children, Lovina, Reynald ("Rey"), Theresa, Barbara, David, Gregory ("Greg"), Sheila. Raising children across the generations, Doris made the transition from the traditional mom of the 1950s to a soccer mom of the 90s. Doris enjoyed reading since she was very young, teaching herself to read, with her first word being “coffee”. She played the piano and loved listening to classical music. She enjoyed being outdoors, observing nature, and enjoying the sun. She was often at the duck pond, zooming around in her power chair, with a customized license plate “CROC LADY”. Yes, she loved her Croc shoes, with matching colors for every outfit. She was a big sports fan and enjoyed both the winter and summer Olympics, ice hockey, and especially soccer. Her favorite teams were the U.S. Women’s National Team and the Portland Thorns. She would plan her dining room meals around their game schedules. Doris is survived by her seven children, Lovina Dresser (Randy), Reynald Dayog (Joan), Theresa Bertheau (Tim), Barbara Thomas, David Dayog, Gregory Dayog, and Sheila Dayog (Karine); 14 grandchildren (John, Desarae, Vanessa, Andrew, Brian, Jessica, Melissa, Adam, Ted, Jonel, Arron, Kaden, Megan, Chase); and 8 great-grandchildren (Daniel, Mikaela, Miguel, Makai, Oliver, Linnea, Mason, and Paloma) The viewing will be on Tuesday, March 15, 2022, from 1:00-4:00 PM, Holman-Hankins-Bowker & Waud (www.waudsfuneralservice.com) at 715 7th Street, Oregon City, OR 97045. A mass funeral service will be held at St. John the Baptist Catholic Church in Milwaukie, OR, on Wednesday, March 16th, 2022, at 10:00 AM, 10956 SE 25th Avenue, Milwaukie, OR 97222. Following the service, an informal gathering will be held at the Willamette View Japanese Pond and Garden at the back of the Terrace building, 13169 SE River Road, Milwaukie, OR 97222 beginning at noon. Doris will be laid to rest with her husband in Los Alto, California. The graveside service will be at the Gate of Heaven Catholic Cemetery in Los Altos, CA March 18th, 2022, at 1:00, 22555 Cristo Rey Drive, Los Altos, CA 94024.

Doris Marie Dayog, 90, known for her kind eyes and gentle smile, passed away on Monday, March 7th, 2022, at Willamette View in Milwaukie, OR. Doris was born on October 22, 1931, to Clarence Kelton Rand and Leah Lenora (McGaughey) in Roseburg,... View Obituary & Service Information

The family of Doris Marie Dayog created this Life Tributes page to make it easy to share your memories.

Send flowers to the Dayog family.