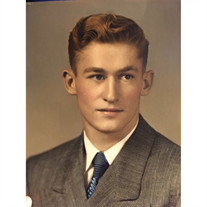 Donald Lewis Fowler  March 11, 1930 - January 21, 2018   Born March 11, 1930, Donald joined this world just a few minutes ahead of his younger, twin brother Dale, in Sanish, North Dakota (now Newtown). Don was the third child of Vernon and Josie Fowler. He had two Sisters Dorothy and Bernice. As a boy, Don helped his Grandfather build houses and learned the brick masonry trade. As a young man, Don attended Oregon City High School and soon met his first wife, D June Rebischke. Don and June were married at Trinity Lutheran Church in Oregon City. Soon after, Don continued his military service stationed at Nellis Air Force Base in Nevada. They were blessed with the birth of two sons, Larry and Donald, and two daughters, Sandra and Janet. The family moved back to Oregon to be closer to family,Don and June divorced in 1966. Don met Evelyn (Lane) Aldrich and her two children, Martha and Chuck. Married and lived in West Linn throughout the 70s and 80s where Don worked as the Carpenter Supervisor for the Portland Public School District, and...Over the next few decades, their family grew.                         Don enjoyed hunting, camping and traveling. They spent time in Prineville, Oregon and finally settled back home in Oregon City. Don is survived by his  twin brother, three sons, three daughters, lots of nieces and nephews, eleven grandchildren and twelve great-grandchildren.  Memorial services will be held at Willamette National Cemetery on Feb 1 at 1:30pm. Celebration of Life to be held at the  Abernathy Chapel 1326 John Adams St Oregon City, OR 97045.   In lieu of flowers please make a donation to a charity of your choice.

The family of Donald Lewis Fowler created this Life Tributes page to make it easy to share your memories.

Send flowers to the Fowler family.