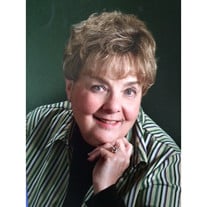 Dixie Jean Lawrence April 19, 1940-September 5, 2015 Dixie Jean (Becker) Lawrence was born April 19, 1940 in Glenwood Springs Colorado to Dick and Bessie Becker, and shortly after, moved to Alliance Nebraska where she was raised.  Dixie always prided herself on being a straight A student through high school.  In her teens, you would often find Dixie at the movies on a Saturday afternoon or working the counter at her parents soda fountain located in the local drug store. Dixie married Jim Lawrence the day after she graduated high school.  They moved to Salem Oregon shortly after they married.  A few years later they moved to Gladstone Oregon where they raised three children, Greg Lawrence, Doug Lawrence and Dana Lawrence. Dixie stayed home with her children during their younger years, and once they were older, went to work as a secretary/bookkeeper in medical offices.  While raising her children, Dixie loved going camping in the summers at Detroit Lake with her family and friends, playing card games, and reading books.  As the children got older, she loved to watch Greg play sports at Gladstone high school, listen to Doug sing and see what his artistic mind could create, and watch Dana cheer and dance for the Gladiators.  Dixie and Jim spent so much time at Gladstone High School events that they were honored with a plaque for being #1 Fans.  Dixie loved her memories from those days and often spoke of them. As the kids got older, Dixie stayed just as busy getting together with her Birthday Club consisting of several close friends.   Dixie's Birthday Club found many reasons to get together besides birthdays such as weddings and baby showers for each other's children.  Dixie loved her trips to Disneyland with the grandkids and to Hawaii with family.  Dixie enjoyed volunteering at Gladstone Christian Church and often sang in the choir. Jim and Dixie moved to Oregon City for a few years where Dixie's mom, Bessie Becker,  joined them to finish out her life.  They then moved to Sherwood four years ago to be closer to their grandsons since they were heading that way more than once a week to watch the boys compete in all of their sporting events.  Dixie became a true Bowmen Fan just as she had been for the Gladiators.  Dixie loved riding in Jim's truck as he would pull the trailer of gear behind the bus full of Varsity Bowmen Football players just to watch their son coach the team.  Dixie attended all of the football, basketball and baseball games that their grandsons Jake and Keegan competed in, and would often host Team Dinners for the boys and their teammates to attend.  Dixie also traveled as far as Arizona and Orlando to watch the boys play baseball during Spring Break. Dixie also loved making the trip South to Grants Pass to see her granddaughters, Gabi and Mikayla, perform in various musical theater productions and dance recitals.   She loved to watch everything she could. Dixie loved life.  She loved it when all three of her kids and six grandchildren would get together every other Thanksgiving in her home.  She was always excited to hear about anything new going on in her children's lives and wanted every detail.  She was a Mom and Grandma to many beyond her own family.  Many people will miss her bright smile, giggle ,and her never ending cheering. Dixie was preceded in life by her parents Dick and Bessie Becker.  She is survived by her husband (of 57 years)  Jim,  son and daughter in law Greg and Kathi, son and daughter in law Doug and Diane, Daughter and Son in law Dana and Dan and grandchildren, Chris, Ben, Jake, Mikayla, Keegan and Gabrielle. A memorial service will be held at Gladstone Christian Church on September 20th at 2:00 pm.  In lieu of flowers, donation may be made to the Sherwood Booster Club  16956 SW Meinecke Rd, Sherwood  OR  97140.  Please put in the subject line - Dixie Lawrence Memorial Scholarship.  A college scholarship will be given out in honor of Dixie.

The family of Dixie Jean Lawrence created this Life Tributes page to make it easy to share your memories.

Send flowers to the Lawrence family.