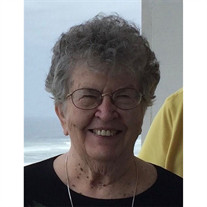 Diane Pearl Ruffin Seifert passed away June 20, 2019 after a long, hard fought battle against metastatic melanoma.  She was born August 31, 1935 in Shreveport, Louisiana to Ann and Ernest Ruffin.    For most of her life she lived in the Pacific Northwest.  She enjoyed the simple life camping, hiking, fishing and working in her grandmother's vegetable gardens in Idaho, Washington and Montana.   Diane was married to Dennis Seifert for over 61 years.  Oh!  The fun that they have had and the love that they have shared.  They met in 1957 at the Division Street Corral.  Both loved dancing and had planned to go with friends.  But the plans fell apart.  They both decided to go alone anyway.  Dennis asked Diane to dance.  And their love story began.  Over their long marriage they shared only two homes; a bungalow in SE Portland, and the house that they built and lived in for over 53 years in the Carus area south of Oregon City.  "I Love You" never went unsaid between the two of them.   Diane's greatest love was her family.  She is survived by her husband Dennis and five daughters; Mary (Dave) Klein, Woodland, Washington; Teresa (Ed) Evans, Naples, Florida; Marilyn (Ed) Sparks, Wallowa, Oregon; Suzanne (Rick) Sullivan, Tigard, Oregon and Nancy Burke (Wayne Morris), Oregon City, Oregon.  As well as 13 grandchildren and 20 great-grandchildren.  Diane is also survived by her siblings; Gary Hubbard, Albuquerque, New Mexico;June Field, Las Vegas, Nevada; Lois Koenig, Granite Bay, California;WinnieZeppieri, Grass Valley, California; Linda Goldser, Portland, Oregon.   Many vacations were enjoyed while camping and hunting all over Oregon.  A favorite spot was Cultus Lake, near Bend, Oregon.  Diane and Dennis also enjoyed a great deal of international travel, particularly to places with sandy beaches and warm water.  They were certified scuba divers and enjoyed the sport around the world.  In addition to a fair number of US states, they traveled to Canada, Mexico, South America, Australia, Southeast Asia and Europe.  They also visited 22 islands in the Caribbean, along with Hawaii and Tahiti.  Diane always said that her idea of heaven was a little grass shack on some remote sandy beach with a stack of books.   She was a very active genealogy researcher for her and her husband's family.  It was not unusual for their vacations to include research on a walk through a cemetery or in a dusty records room at a courthouse.  Diane was always happy to share her research and documentation that she was able to locate; most of which she found before the internet!   Her professional career included 25 years with the US Postal Service.  Diane started at the USPS as a part-time rural carrier and worked her way up through the ranks to serve in the Portland main office in the EEOC department, as well as postmaster for Otis (her first!), Estacada, Gladstone and West Linn where she retired in 1998.  She was also very active in the national association of Postmasters.  Even after retirement she continued to attend their conventions.   It was while working full-time at the Post Office that Diane put the effort into finishing college.   She was very proud of her accomplishment and earned a Bachelor of Science Degree in General Studies from Eastern Oregon University in 1987.   Diane joined the Clackamas Sunrisers Kiwanis Club in 1987, the same year that they started to accept women members.  During 19 years of membership Diane served in various leadership positions including Lt. Governor in 1993-94.  Both she and Dennis were members for many years and enjoyed the community service projects that they worked on.   A memorial service will be held at Holman-Hankins Funeral home in Oregon City on Tuesday, July 2nd at 2:00 pm.  Wear your tropical attire to honor Diane's love for the sun, surf and sand!   It was Diane's wish that in lieu of flowers, donations can be made to the following charities that were always in her heart:  Mt. Hood Kiwanis Camp or Kiwanis Doernbecher Children's Cancer Program c/o George Chesley, 20241 Rae Rd., Bend, OR. 97702.

Diane Pearl Ruffin Seifert passed away June 20, 2019 after a long, hard fought battle against metastatic melanoma.  She was born August 31, 1935 in Shreveport, Louisiana to Ann and Ernest Ruffin.    For most of her life she lived in the Pacific... View Obituary & Service Information

The family of Diane Pearl Seifert created this Life Tributes page to make it easy to share your memories.

Send flowers to the Seifert family.