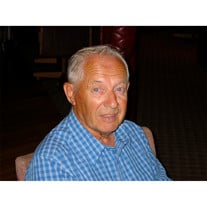 DELL SCOTT FARLEIGH,  DECEASED DECEMBER 27, 2015 He was a loving husband, father, grandfather, and great-grandfather and loyal to his friends. Dell was born on August 10, 1922, in Portland, Oregon, to Marie and Lou Farleigh. He passed on quietly after 70 years of marriage to his wife, Lois Mae Farleigh, who was with him at beautiful Riverview Adult Care Home in Lake Oswego. They lived together and raised their three sons, Scott Farleigh, Randy Farleigh, and Rick Farleigh, in the family home in West Linn since 1949. Dell is survived by his wife, Lois, his three sons, four grandchildren, one step grandson, three great grandsons, and one great step grandson. Dell served in the US Navy during WWII, where he specialized in hydraulics and auto-pilots as an aviation machinist mate. He worked for Boeing in Seattle before and after the War, drove oil trucks in Clackamas County, and then became an automobile specialist, initially as a salesman, and then later as the Sales and Leasing Manager for Lynn Kirby Ford in Portland, where he finally retired. Dell was an active member of the Oregon City Elks which became one of his greatest passions after he retired, and he was even recognized as "Elk of the Year" by the Oregon City Chapter for his community service. He also had a great passion for boats and taught his wife, his sons, and his grandsons all to water ski. He was a fisherman and loved fishing with his boys, especially in Alaska, where his sons, Randy and Rick resided, Randy as an attorney, and Rick as a physician. His son Scott, was also an attorney who still resides in Oregon. But his special time during most of the sixty-five years that Dell lived in the family home in West Linn, was the time he spent on his tractor on the back lot growing potatoes, corn, squash, lettuce, and of course his tomatoes which were second to none. He taught his sons to drive on the tractor, to feel the dirt in their hands, to plant and watch seeds grow, to nurture and care for the crops, to irrigate with water from the adjacent creek, and to love the land and to respect it.  The tall firs which now grace the property were planted by Dell and his sons after a Christmas tree outing in Beavercreek in about 1955. Dell and his wife and sons were all charter members of the Emmanuel Presbyterian Church in West Linn which will be the location of a memorial service at 2:00 PM on January 9, 2016, followed by a reception at the Oregon City Elks Club. The family asks that any donations in his honor be made to the Casey Eye Institute in care of the Oregon City Elks Club.

DELL SCOTT FARLEIGH,  DECEASED DECEMBER 27, 2015 He was a loving husband, father, grandfather, and great-grandfather and loyal to his friends. Dell was born on August 10, 1922, in Portland, Oregon, to Marie and Lou Farleigh. He passed on... View Obituary & Service Information

The family of Dell Scott Farleigh created this Life Tributes page to make it easy to share your memories.

Send flowers to the Farleigh family.