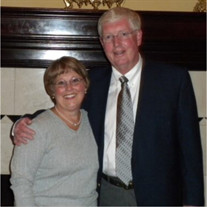 David Peter Wilson October 4, 1945 - June 27, 2019   David Peter Wilson, 73, passed away June 27, 2019 peacefully in his Oregon City residence after a long hard fight against cancer. He was born October 4, 1945 in Astoria, Oregon to Bill & Irene Wilson. He moved to the Portland area and graduated from Milwaukie High School in 1963. He later joined the National Guard from 1966-1972 before purchasing his current residence in Oregon City in the spring of 1974. In 1977 he married Linda S. Crawford and in 1981 they welcomed daughter Kim.   Dave's 40 plus year career was spent in the trucking industry that included over 38 of those years with Reddaway Truck lines. During his career at Reddaway he wore many hats including driver, trainer, supervisor, friend, and mentor to several individuals.   During their 42 years of marriage, Dave & Linda traveled in their rv or flew to several locations to meet up with family and friends and to explore new areas. Their travels took them into 42 states where they created many memories from family reunions, visiting National Landmarks and Historical sites, museums, and events within the trucking industry.   Dave's hobbies included membership in the Pioneer Motorsports club, activities within the trucking industry, camping, traveling, automobiles, and most importantly spending time with family and friends.   A good member of the Oregon City Elks Lodge #1189 is where he enjoyed camping at the park, participating in several community events, as well as an annual participant in the food basket delivery program.   Dave's Survivors include his wife Linda, Daughter Kim and Son in law Jason, granddaughter Abigail Irene and another one the way, his brother Tom and Sister In law Karelyn of Pasco, Washington and an amazing network of extended family and friends.   He was preceded in death by both his parents Bill & Irene in 1992 and 2001 respectfully.   A private inurnment will be held at Mt. View Cemetery in Oregon City. A Celebration of Life will be held at a later date.   It was Dave's request that In lieu of flowers donations be made to either the American Cancer Society or Elks Casey Eye Clinic.

The family of David Peter Wilson created this Life Tributes page to make it easy to share your memories.

Send flowers to the Wilson family.