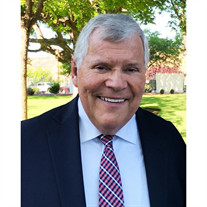 On Wednesday, May 22nd, 2019, David LaVaughn Haskett, loving husband and father of six children, passed away at the age of 77. Dave was born on March 15, 1942, in Pocatello, Idaho, to LaVaughn and Esther (Housley) Haskett. When Dave was two years old, his father was drafted into the Navy and served for the next two years. Dave was the older brother to Gary Hugh and Mary Alice. They enjoyed hunting and fishing with their extended family. He was very athletic and played on the Varsity Basketball Team at Pocatello High School.   He attended Idaho State University for one year before serving a Church Mission to Western Canada. After his mission he returned to Idaho State, where he met Mary Louise Peden. They were married in the Logan LDS Temple on June 16th, 1966. Dave graduated from the University of Utah with a degree in Chemical Engineering. He went to work at Crown Zellerbach and pursued a career in the pulp and paper industry retiring 40 years later as a Director of Pulp Manufacturing at Louisiana Pacific Corporation. Dave and Mary Louise raised six children, one daughter, Jennifer, and five sons, David Jr, Sean, Ryan, Aaron, and Josh. They shared special memories while building two houses together. Dave and Mary Louise enjoyed traveling the world, outdoor activities, family vacations, spending time at the ocean and attending all athletic events. Dave also enjoyed spending time together in the mountains with his sons. They went on many family adventures with their children and grandchildren including one of their favorite places - Sunriver. Dave shared his passion for fishing and golf with his children, as well as, his grandchildren. Cherished moments were golfing at St. Andrews, attending the Masters, and salmon fishing in Alaska.   Grandpa Dave was the number one fan at all of his children's and grandchildren's sporting events.   Dave was an active member of the Church of Jesus Christ of Latter-Day Saints serving in numerous callings. His passion was in serving young men in Boy Scouts, teaching Primary and Sunday School, and serving as a Temple Worker.   Dave was willing to help anyone at anytime. His willingness to serve and generosity were immeasurable. His infectious smile and optimism uplifted everyone he met. He was active in community events and loved attending West Linn High School sporting events. Dave was preceded in death by his parents and one grandson, Brody David Haskett.   Survivors include his wife, Mary Louise; daughter Jennifer (Ed) Drake; five sons: David Jr (Kristi), Sean (Michelle), Ryan (Hillary), Aaron (Lila), Josh (Brooke), three granddaughters and twenty-two grandsons.   A viewing will be held Sunday evening from 7:00 - 9:00 PM at the LDS Chapel at 1395 Rosemont Road in West Linn. An additional viewing will be held prior to services from 11:00 - 11:30 AM. Funeral Services will be held at the LDS Chapel at 12:00 PM. Burial will be at the Redland Pioneer Cemetery at 3:30 PM.

On Wednesday, May 22nd, 2019, David LaVaughn Haskett, loving husband and father of six children, passed away at the age of 77. Dave was born on March 15, 1942, in Pocatello, Idaho, to LaVaughn and Esther (Housley) Haskett. When Dave was two... View Obituary & Service Information

The family of David LaVaughn Haskett, Sr. created this Life Tributes page to make it easy to share your memories.