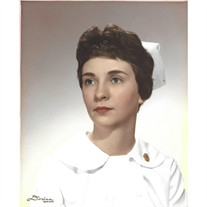 Darlene Ramsey was born Darlene Annette Tuscher in Grand Rapids, South Dakota on July 10, 1939. There she grew up with her parents Felix and Doris, older brother Calvin and younger sister Phyllis. Upon the sudden passing of her father, the remaining family moved to Kalispell, Montana. They lived on the farm with their grandfather while attending school in town at St. Matthew Catholic School. Doris soon married Arthur Gilbertson, and with his family, they all built a house in town. Darlene attended Flathead High School and graduated 1957. Darlene pursued an education in nursing and moved to Spokane, Washington to attend the Sacred Heart School of Nursing. With her degree, Darlene moved to Seattle and began her career as a registered nurse. It was in Seattle where friends introduced her to the love of her life, Norman Ramsey, and they married on May 25th, 1965. Unable to have children of their own, they lovingly adopted two children through Catholic Community Services. Darlene worked part time for a while, but eventually decided to stay home with their children to give full attention to her family. Darlene volunteered at school, was the co-leader of her daughter's Girl Scout troop, and kept busy with her children's activities. She was always up for an adventure with her family as they enjoyed hiking on the weekend, trips back to Montana or down to Oregon to visit family, camping, or vacations. Darlene was a faith filled believer who enjoyed volunteering for her church in Seattle. She was a regular at Bible study and raised her children Catholic. She was also gifted with sewing, whether it was an outfit, pajamas, or even a prom dress. Darlene loved to craft, knit & crochet, and cross stitch. She was an avid reader who enjoyed getting out in her yard and making it beautiful. As their children grew up, Darlene and Norman found themselves moving to Vancouver, Washington to be closer to family and especially their grandchildren. In these later years, Darlene remained involved in the church, was a doting grandmother, and still loved to be creative both inside and outside. On May 4th, 2015, Darlene suddenly lost her life to a ruptured aortic aneurism. She is survived by her brothers/Sisters-in-law Calvin and Dorothy Tuscher and Doug and Pat Gilbertson, son/daughter-in-law Kevin and Danyelle Ramsey, daughter/son-in-law Laura and Jason Preuitt, granddaughters Emma, Eleanor, Evelyn, and Amanda and grandson Ramsey.  Remembrances and donations can be made in her honor to Catholic Charites.

Darlene Ramsey was born Darlene Annette Tuscher in Grand Rapids, South Dakota on July 10, 1939. There she grew up with her parents Felix and Doris, older brother Calvin and younger sister Phyllis. Upon the sudden passing of her father, the remaining... View Obituary & Service Information

The family of Darlene Annette Ramsey created this Life Tributes page to make it easy to share your memories.

Send flowers to the Ramsey family.