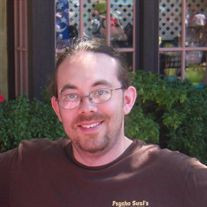 Daniel Jesse Stults was born December 4, 1978 in Portland Oregon to Pat and Al Stults. As a young boy Dan loved dare devil tricks, animals and dreamed of saving the planet. In high school he was very involved in wrestling and worked as a lifeguard at the local swimming pool. He was also a part of Oregon City Christian Church youth group where his relationship with Christ really took flight. In the summer of 1996 Dan met his life partner Jenny Steffen. They married August 14, 1999. Dan graduated from Boise Bible College in 2002 with a Bachelor of Science in Christian Ministries. He went on to graduate with a Masters of Counseling from Western Seminary. He was two classes away from accomplishing his Masters of Divinity when he passed. In the spring of 2006, in the middle of all that schooling, Dan and Jenny took a lifelong dream trip to the Holy Land. Dan and Jenny's daughter India was born on May 3,2007. India had Dan wrapped around her little finger from day one. These three musketeers lived life to its very fullest. They explored, invented and imagined as much as one trio ever could.Dan always wanted to make the world a better place. He strived to uphold the words of the Lorax"Unless someone like you cares a whole awful lot, nothing is going to get better, it's not." He had aheart for helping kids and teens find a relationship with God. He always dreamed of starting a church with a focus on community.In recent years Dan made a career out of helping and advocating for the mentally ill. This was a career move that Dan would not have chosen for himself, but once there he saw how much he was needed and felt a desire to try and make their lives better.Dan passed away in the wee hours of Monday morning, Jan. 12, 2015. He is survived by his loving wife Jenny, and dynamic daughter India; his parents Pat and Al from Oregon City; brothers Rick, Mike, Greg,David and their wives; brother Jerry and grandparents Elmer and Vi Kaston of Gaylord Minnesota. Numerous other family members will also miss Dan greatly. Dan's family and friends feel grateful for the time they've had with Dan on earth and know that he is in Heaven talking theology with Jesus.

Daniel Jesse Stults was born December 4, 1978 in Portland Oregon to Pat and Al Stults. As a young boy Dan loved dare devil tricks, animals and dreamed of saving the planet. In high school he was very involved in wrestling and worked as a lifeguard... View Obituary & Service Information

The family of Daniel Jesse Stults created this Life Tributes page to make it easy to share your memories.

Send flowers to the Stults family.