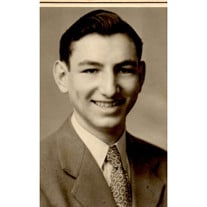 Currin P. Cox was born July 22, 1926 in Heppner, Oregon.  He passed away peacefully with his daughters at his side on June 26, 2021 in West Linn, Oregon, just about a month shy of his 95th birthday. Currin was the grandson of pioneers who came to Oregon on the Oregon Trail.  They helped build the State of Oregon, including infrastructure, roads, bridges, some were masons who built courthouses and the iron foundry in Lake Oswego.  They farmed and ran country stores and served in government.  He was very proud of his family's heritage. Currin was raised on a farm in Redland by his parents, William Prewitt Cox and Nettie Elsie Cox with his older sister, Genevieve Lynette Cox, all of whom predeceased him. He attended Evergreen Grade School, graduated from Oregon City High School in 1943 at the age of 16, and worked in the paper mill and shipyard until he was old enough to start college at Oregon State University.  He enlisted in the Army December, 1944 and, after completing basic training, returned to college in February, 1945 in the Army Specialized Training Program.  He studied agriculture and engineering, and graduated from OSU in 1951. Currin married Jacquelyn Leah Hayward on March 25, 1955.  They celebrated their 66th Anniversary earlier this year.  He did his best to care for mom until she entered memory care in March of 2020.  He is survived by Jackie and their two daughters, Lori Anderson and Teri Parr, their spouses, Michael Anderson and Loren Parr, grandchildren, Genevieve May, Kris Bernard, and Alec Parr, great grandchildren, Brock Lisak, Chase May, Grace May, and River May (with another one on the way), as well as nieces, nephews, and cousins.  He was very proud of each and every one. Currin spent most of his career working as a die caster for PECO in Portland, Oregon. He mostly enjoyed spending time with family and friends and being in the great outdoors of the beautiful Pacific Northwest where he spent much of his time camping, fishing, hunting, crabbing, clamming, hiking, rock-hounding, beach-combing, berry picking, and going for Sunday drives. Currin was a life-time member of the B.P.O.E. in Oregon City where he played poker every Thursday for the last 70-some years and was a member of the campers club.  He was able to join the Elks after mom won a BINGO jackpot to cover his initiation fee.  The family enjoyed spending time at the Elks Park in Mulino, and even spent an entire summer there one year.  He commuted back and forth to work from the park. He served on the Board of the Clackamas County Historical Society. After retiring, Currin and Jackie spent the next 20 years as snowbirds, hauling their travel trailer to and from Yuma, Arizona every winter, stopping at various places on the way there and back.  They also traveled abroad with their daughter Lori and her husband Mike to the Mediterranean and Australia and New Zealand. Currin had a passion for learning and loved to read.  He would read several books a week from the Gladstone City Library. He was also a sports fan and could be found at one of the local high schools on Friday nights watching the kids play football and basketball.  Of course, he was also an OSU Beaver fan.  He had the unique ability of being able to watch a game on TV while simultaneously listening to another game on the radio while reading the sports page of the newspaper! Currin had many great, life-long friendships and a close family.  He was an easy-going, soft-spoken man who kept his opinions to himself, had a dry sense of humor, and told a great story.  No matter how long you visited, when you left his home he would say, "Come back when you can stay longer."  He enjoyed a long, blessed life and loved his friends and family well. The family will have a small, graveside service at Mt. View Cemetery where his ashes will be inurned next to his parents' graves.

Currin P. Cox was born July 22, 1926 in Heppner, Oregon.  He passed away peacefully with his daughters at his side on June 26, 2021 in West Linn, Oregon, just about a month shy of his 95th birthday. Currin was the grandson of pioneers who... View Obituary & Service Information

The family of Currin Cox created this Life Tributes page to make it easy to share your memories.

Send flowers to the Cox family.