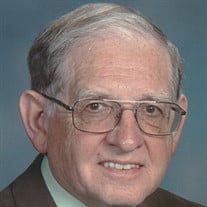 Not sure what to send?

Charles Edward Thomas was born on February 15, 1940, to Georgia Lucille (Winegardner) and William F. Thomas, in Kenton, Ohio. Charles passed away and went home to be with his Lord and Savior Tuesday, May 10, 2022. He lived in Redland, Oregon. Charles graduated from Hardin Northern High School and then earned his degree in Pharmacy from Ohio Northern University. He started his pharmacy career in Washington DC., and following, spent 30 years working as a pharmacist in Oregon until his retirement. He married Judy Zoet, on March 5, 1965, and were married 55 years, raising a son and daughter, Chuck Jr. and Jodi. He was an avid gardener, growing a variety of fruits, berries, vegetables, lots of flowers, and raising chickens and cows. He was active in the community and participated as a member of the district water board. He was active in church and served as deacon and Sunday School Teacher for many years. A devoted father, he was known as provider and coach. He was dedicated to helping his children develop and pursue every talent and interest. While he worked long hours at his job, he worked equally long and hard at coaching at home and from the sidelines. He showed by example the rewards of hard work. Charles was also blessed with two grandsons, and together with Judy, as grandparents, attended every school play, concert, science fair, program and sporting event. He loved teaching his grandsons how to fish and provided years and years of fun fishing vacations. Family was Charles’s highest priority and greatest joy. He found great pleasure spending time with his family, extended family and friends, and church body. Together with Judy, they enjoyed fishing, attending all the sporting events that his children and grandchildren participated in, and traveling. A man of faith, Charles’ well-worn Bible is a testimony to its importance in his life and that his trust was in the Lord. This was the result of knowing and believing what the Bible says. Charles held firmly to the knowledge that we have a God we can trust in, who is always with us and will answer in His own time and way. Charles was preceded in death by wife, Judy Thomas. He is survived by son, Chuck Thomas Jr. (Carolyn), daughter, Jodi Stapleton (Brent) and two grandsons, Brady and Ben Stapleton. A Graveside Service will be held at Redland Pioneer Cemetery, Friday, May 20 at 2pm. All are welcome.

Charles Edward Thomas was born on February 15, 1940, to Georgia Lucille (Winegardner) and William F. Thomas, in Kenton, Ohio. Charles passed away and went home to be with his Lord and Savior Tuesday, May 10, 2022. He lived in Redland, Oregon. Charles... View Obituary & Service Information

The family of Charles Edward Thomas created this Life Tributes page to make it easy to share your memories.