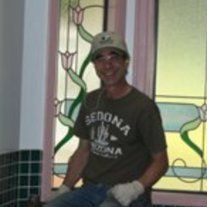 Charles (Chuck) Paul Iselin, 57, passed away at home on May 5, 2013 in Beavercreek, Oregon. After a gracious and valiant struggle with ALS (Lou Gehrig's Disease), Chuck found peace surrounded by the love of his family and friends. Chuck was born on September 28, 1955 in Racine, Wisconsin to Roger and Mary Iselin. He graduated from Washington Park High School in 1974. Instead of participating in his high school graduation ceremony, Chuck and two classmates went to a concert, much to the chagrin of his parents. In the winter of 1980, Chuck left Racine for warmer weather in Phoenix, Arizona where he worked construction. He left construction to pursue his artistic abilities in the printing field and became skillful at the craft of stripping film. As the trade changed, so did the opportunities, which brought Chuck to Portland, Oregon in 1987 to continue his craft. Chuck loved sailing, so in 1988 he bought a 36 foot Cascade sailboat, which was his home for two and one-half years. After selling his boat in 1993, Chuck bought and moved into a duplex. Shortly after that, he moved into a house, but continued renting the duplex. He truly enjoyed the role of landlord and making sure his renters were always taken care of. In 1991, Chuck met his soul mate, Carolee, on a blind date. They wed on September 21, 1997. In 2001, Chuck and Carolee found their little piece of Heaven on eight acres of land with a view of Mt. Hood outside Beavercreek, OR. After eight years in their house, they moved to an apartment above their garage and began a major remodeling project, which lasted over three years. Chuck took great pride in his work on the house and relished the time spent expressing his creativity in all aspects of the remodeling project. He put in hours and hours of hard work and enjoyed every minute of it. Chuck and Carolee moved back into their home shortly after Chuck was diagnosed with ALS. It is of great accomplishment that Chuck invented and holds the patent for a beverage holding glove soon to be known as the Tail-Gator made by Becker Glove Company to be marketed soon. Chuck always thought of the welfare of others and had the kindest heart. He had a wonderful gift of relating to anyone he came in contact with and had the greatest sense of humor. He was a man of many words and entertained family and friends with his storytelling. He had an infectious smile and wit that embraced all those around him. He was generous in all areas of his life to the very end. Chuck loved life taking pleasure in camping, fishing, crabbing, and working on his property alongside his wife. Chuck had passion for all things and everyone. Chuck is survived by his beautiful wife of fifteen years, Carolee. He is also survived by one brother, William (Anne) Iselin of Delafield; three sisters, Nancy (Timothy) Collentine of Menahsa; Susan (Daniel) Paulson of Racine; and Sally (Randall) Reichert of Raymond. He is also survived by four nieces and three nephews. Chuck was preceded in death by his parents, Mary and Roger Iselin. Chuck's passing is a tremendous loss for so many and his contagious smile, positive outlook, and appreciative attitude will forever remain in our hearts. "True story" A celebration of his life will take place at a later date in Beavercreek and Wisconsin. Please visit www.waudsfuneralservice.com to view and sign the guestbook. The family would like to thank Providence Hospice for their support and compassion.

Charles (Chuck) Paul Iselin, 57, passed away at home on May 5, 2013 in Beavercreek, Oregon. After a gracious and valiant struggle with ALS (Lou Gehrig's Disease), Chuck found peace surrounded by the love of his family and friends. Chuck was... View Obituary & Service Information

The family of Charles Paul Iselin created this Life Tributes page to make it easy to share your memories.

Send flowers to the Iselin family.