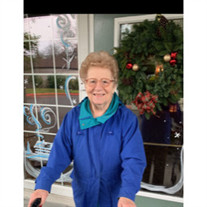 Carolyn Mary Roethe Krueger Carolyn Mary Roethe Krueger passed away in West Linn on April 13, 2020. She was 79 years old. Carolyn was born on February 19, 1941, at Oregon City hospital to her parents, Ernest Ferdinand Gottlieb Roethe and Gretchen Ida Amelia Wagenknecht.  Carolyn was proud of her family name and heritage. She was raised at the water's edge of the Willamette River, where she had fond memories of growing up with her brothers.  Also among her happiest memories were the family and church gatherings at Carolyn's childhood home.  Carolyn raised fragrant Sweet Peas, Roses, and Irises.  Regularly Carolyn would fill her glass vases with flowers for her visits to the Senior community or with those who were homebound. She lived in San Francisco for many years and worked full time as an auditor, operations manager, and bank officer for over thirty years at Bank of America. She and Donn loved the San Francisco Giants and had season tickets. They were active with Elks Lodge 1189 and served with the National Association of Retired Federal Employees as well as enjoyed traveling annually to attend Donn's USS  Chickasaw Navy reunions.  Carolyn always looked forward to hunting and fishing seasons with Donn, particularly when she brought in the biggest catch of the day. Both Donn and Carolyn shared a mutual love for Oktoberfest in Mt. Angel, polka music, and John Wayne films. Faith was a very important part of Carolyn's life, and she was confirmed at St. Stephen Lutheran Church in Gladstone. Zion Lutheran Church in Oregon City was a well-loved place of worship and community where Carolyn was a servant leader who organized many events.  Using her banking skills, she would count the offering on Monday mornings in her role as the treasurer, as well as take attendance, organize funeral receptions and schedule weekly Sunday greeters.  She and Donn were indispensable in the life of Zion Lutheran. The hymns of her Christian faith have been a comfort to her as memory issues have become more challenging.  These same hymns became words of hope in God's faithfulness and His great love for her.  She frequently accompanied her singing with finger tapping, and would comment, "I'm doing what Mom used to do." Carolyn is survived by her brother John Roethe, Goddaughter Jennifer, her niece and numerous nephews.  She also leaves behind many loving cousins. She was predeceased by her husband of 46 years, Donn Krueger and brother Edward Roethe. Her final resting place will be with her husband, Donn, at Willamette National Cemetery. The family has gratitude to the staff of Tanner Springs Assisted Living Facility in West Linn.  Memorial contributions may be made to either: Zion Lutheran Church, 720 Jefferson Street, Oregon City, OR 97045 Hospice of the Northwest,                 6130 NE 78th Ct #C10, Portland, OR 97218                  . Waud's Funeral Home, Oregon City is handling arrangements. Due to State Coronavirus restrictions, there is no service planned at this time.  There is an online guest book and Life Tribute Video.

The family of Carolyn Roethe Krueger created this Life Tributes page to make it easy to share your memories.

Send flowers to the Krueger family.